What Is Broga, and Should You Try It?

Broga (yes, yoga for men) is a thing—and it's a serious workout. 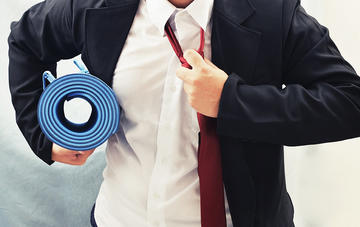 Yoga's popularity in the U.S. is undeniable. According to a 2016 Yoga in America study, there are 36.7 million yogis, which is double what it was in 2012. But as the practice continues to grow, there's one change happening: Men are getting on the mat. Sure, women may represent 72 percent of U.S. practitioners now, but Broga is trying to change those numbers and get more dudes flowing.

But what the heck is Broga, exactly? It's traditional yoga with a twist—one that usually invoves adding HIIT and strength exercises into the mix. The style has grown consistently since it began in 2009; there are over 500 certified Broga instructors, and classes are offered in the U.S, Dubai, Denmark and soon Australia.

Adam O'Neill, co-founder and president of Broga Yoga, believes the brand came out of necessity.

"Growing up my mother was a yoga teacher," says O'Neill. "She always recommended that I incorporate yoga into my sports training, but I never did." O'Neill, like many guys in his small town in upstate New york, didn't think yoga was socially acceptable or cool. "This was the 1990s and there was this stigma that yoga was this groovy, quite feminine thing."

It wasn't until later, when O'Neill hurt his back and developed sciatica, that his perspective changed. Throughout months of physical therapy to rehab his back, he realized the workouts he did had a marked resemblance to yoga. "I was put through movements that I recognized as poses I'd seen my mother do," he says. Which is when he realized that most U.S. marketing efforts target women, and there was a gap to be filled. To do that, he knew it needed to be called something else. "I thought 'brother, bro, broga! That's the one!"

After rehabilitating his back, O'Neill mentioned the Broga idea to his friend Robert Sidoti, a yoga instructor, personal trainer and the creator of Broga Yoga. While O'Neill went back to school for two years, Sidoti trademarked, developed and started teaching Broga classes. The business partners launched a class in 2010 in the Boston area, and after a few months, the positive feedback started rolling in. "We struck a chord and there was an opportunity to serve a lot of people," says O'Neill.

So what does Broga involve?

"The difference between Broga and yoga is Broga is first and foremost a strength workout with some cardio, then we weave in the vinyasa yoga," says Emmanuelle Galland, a Broga instructor, traditional yoga instructor, NASM C.P.T. and AFAA Group Fitness Instructor at Crunch Gym in Brooklyn, New York. "It's one of the rare yoga forms where you achieve a really high heart rate because we do mountain climbers, plank jacks, and burpees. Sometimes we do four minutes of squats without a break."

The class starts with floor stretches, moves into cardio intervals, then the strength flow with pushups, followed by poses like Warrior 2 and Crow. Broga also emphasizes verbal instructions and music.

"I only use functional training terms, words I'd use in personal training," says Galland. "Rather than saying we're doing the Upward Salute, I say hands over head, extend arms and stretch your lats." As for music, Galland's playlist falls within the rock and indie music genres. "I play Jack Johnson, Radiohead, Bon Iver, Led Zepellin, Explosions in the Sky—music guys can listen to in California when waiting to surf," she says.

And just because the classes are targeted to men doesn't mean women can't attend. O'Neill says about 50 percent of instructors are female, and Galland's classes are typically a 70:30 man-to-woman ratio, which aligns with what O'Neill estimates the average gender breakdown is per class internationally. "Women say they don't feel the stretch in their legs but they're challenged with the pushups—they come for the upper body and core strength in my class," says Galland. "Guys report positive effects, including better sleep and communication skills (specifically being more open-minded), improved digestion and flexibility, and decreased back and knee pain."

Can't find a studio near you? Last year, Broga Yoga launched an online studio where people can stream workouts for $12 a month so bros—and ladies—can all feel the burn on their way to becoming a true brogi. 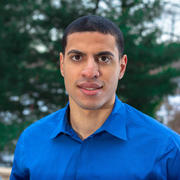 Mark Barroso is an editor and writer who has contributed to Muscle & Fitness, Men's Fitness, M&F Hers, FLEX and Spartan Race. Mark's writing topics are very broad: from athlete interviews and gear reviews to research roundups and nutrition tips, Mark covers it all.  More →
More from Mark