Om Schooled: How Yoga Taught One Woman to Listen to Her Body | Fitness Magazine
Skip to main content

Om Schooled: How Yoga Taught Me to Listen to My Body

A headstand gone wrong taught me what a poseur I'd been.
By Sarah Hepola 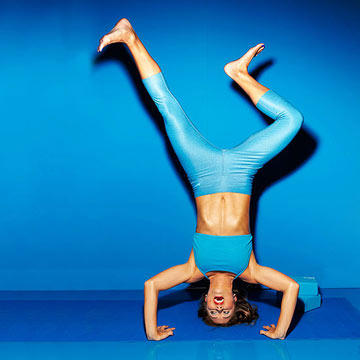 I was halfway through a Saturday morning yoga class when the substitute teacher suggested we try a headstand. Actually it wasn't a mere headstand. It was a baffling contortion that appeared to be one part break dancing and one part Cirque du Soleil.

"Come on, give it a try," she said to the roomful of reluctant spectators.

The woman had just started teaching yoga; I didn't want to be difficult. So I hoisted myself into this absurd position and hoped for the best. First I thought I couldn't do it. Then I thought I couldn't get out of it. The whole left side of my body seized up. Do you know those cartoons where somebody gets electrocuted and his skeleton lights up like a Christmas tree? That's what it felt like. But I didn't scream. In fact, I didn't say anything. I tumbled out of the pose, smiled at the substitute and spent the next four months regretting every second of that failed yoga exercise.

When I was asked to describe this move — by the physical therapist, by the acupuncturist, by the orthopedic specialist who finally diagnosed two herniated discs in my spine and suggested minor surgery — I would feel a sting of shame. People couldn't believe I'd even tried it. They would cluck their tongues and say, "You're not supposed to do headstands!" as though I had mixed cough syrup and vodka. But I hadn't meant to abuse my body. In fact, for the first time in my life, I was actively attempting to do the opposite.

I had spent a good number of my fighting years drunk or hungover. I avoided all sports. I wasted weekends on the futon watching reality TV. When I finally quit drinking, at 35, I wanted something different — the peace and calm that yoga promises. All that Zen, and tight little buns to boot. I'd long dabbled in yoga, but now I pledged myself to it. I went three times a week to a cozy spot in my neighborhood. My regular instructor, a cool lady with a streak of hot pink in her hair, was helping iron out my form, and on good days, I was amazed by what my raggedy body could accomplish.

"You're stronger than you think," she said to me, and I understood that she meant more than just my ability to hold a tree pose.

Then came the headstand that derailed my life. Well, it didn't derail my life so much as it moved my entire life back into bed, where I sulked and experimented with smelly medicinal patches and read the current crop of media stories, inspired by William J. Broad's book The Science of Yoga, about yoga's harmful effects on the body. Those articles raised good points: There were too many green instructors out there (the substitute who taught my class was eventually let go); headstands should be attempted with caution; all too often, classrooms become competitive.

But changing your life takes patience and usually involves dumb mistakes, and I found I wasn't ready to give up on yoga. In fact, as I healed enough to be able to return to class, I discovered that the whole experience had taught me more about yoga than a decade of half-hearted downward dogs. Because yoga is about listening to your body. It is about shutting out the world's expectations and determining your own. I did that crazy pose because I wanted to be a good little yogi, but I knew it was stupid when I attempted it. The fact that I was more willing to trust a stranger than I was to trust myself tells you something about a different sort of pain that I carry.

Yoga doesn't come without risk. The same could be said of running or bicycling or, really, any activity that moves us out of our comfort zone. The only way to ensure that we never hurt ourselves, I suppose, is to flop onto a futon and watch reality TV. But I can assure you, from experience, doing that causes its own kind of injury.

So I continued my practice, and you know what? I'm stronger than I realized. Now, when an instructor suggests a position that doesn't feel right, I sit quietly on my mat. In some ways, this feat is as astonishing as the wacky posture that inspired this story in the first place. I have spent so much of my existence bending myself into pretzel shapes to please the people in my life. I have worried about their judgments. I have worried about their feelings. But all that anxiety meant I often ignored myself, and yoga helps me change that. Whereas I once relied on a bottle of wine to quiet the world and its demands, I can now experience that calm on my mat, without all the collateral damage caused by drinking too much.

It's a tall order to change a lifetime of bad habits. But I find that closing my eyes, standing really still, and listening to my own breath is an awfully good start.