The sci-fi actress also shares how she stays healthy with an autoimmune disease, and why she couldn't care less about how she looks as a new mom. 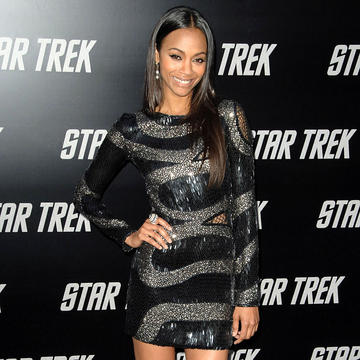 Thanks to Zoe Saldana's press circuit to promote the latest Star Trek installment (out Friday), we've been blessed with tons of insight into the actress's fitness and diet regimen. And because Saldana, 38, is both a mom to 20-month-old identical twin boys and filmed fight scenes in skintight outfits for her role as Uhura, we'll be taking as much advice as we can. Listen in.

On training for her role: "I was already in my process of slowly getting back to my normal routine with my body [after giving birth], so I just started doing some power yoga and a lot of floor work—breathing has been helping me a great deal," she told the Coveteur. During training, Saldana also stayed away from "any hardcore training that would be too exhausting for my system," she told British Glamour. (Want to train like Saldana? Here's a power yoga routine to get started.)

On managing her autoimmune disease: The star revealed she has an autoimmune disease condition, Hashimoto's thyroiditis, which her mom and sister also suffer from. "Your body doesn't have the energy it needs to filter toxins, causing it to believe that it has an infection, so it's always inflamed," she told Net-a-Porter. "You create antibodies that attack your glands, so you have to eat clean." As a result, Saldana shares that she and her hubby have gone gluten- and dairy-free.

On eating to stay fueled: Saldana focuses on eating "super clean and healthy" so that her body has the energy it needs while she's working. She keeps it simple with fish, chicken, or steak "if she has to." "I love protein, but I'll also have a little bit of quinoa to make sure I get iron from my grains. I love chicken soup; I could eat it forever," she said. "I'm of Latino descent, so I like rice and I love beans," she adds.

Her go-to dessert: "After dinner or right before I go to bed, I like to have a little cup of berries, and I feel so good. I feel like I'm having chocolate [because they're so sweet], but it's still nurturing!" she said.

Her secrets to raising two boys under age 2: "Caffeine and a husband that I just boss around," Saldana told Stephen Colbert. Preach.

On getting older: "I had a great time in my twenties. Then your doctor says you're losing calcium in your bones. What the f*** is that?! I would hear those conversations with my mom and grandma, thinking I'd never get there. I'm going to live forever! But all of a sudden it hits you. I s*** you not, it's from night to day," she said.

On her character's fight scene: "[Uhura's fighting scene] was so fast, they were already working with the stunt team and I came on-set, and what I saw was the simplest routine. I saw it as a dance choreography. I just got into it! It was super fun, and it was also a very fast movement that I did and it didn't require me spending countless hours in training," Saldana said.

On body acceptance and staying grounded: "Before I had the boys, it was all about staying fit and keeping the body that I wanted to keep; it was all aesthetic," she said. "Now it's a desire and a pleasure to be present."