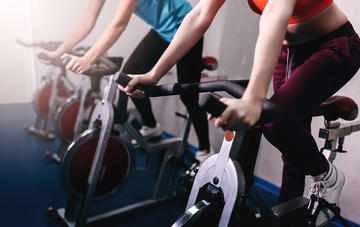 Pushing through the burn is part of a good, sweaty spin class. But there's a big difference between that 'hurts so good' feeling and real pain. So if you've ever left the studio with a killer workout on the books, but an achy lower back to show for it, here's how to stop the pain ASAP, and why it happens in the first place.

What's causing your back pain?

While everybody and every "body" is different, low back pain during or after spin class happens for many reasons, and sometimes multiple things are at play. "Lower back pain from cycling can be related to several different factors including improper bike setup, poor form, the muscles used in the workout itself, overuse, or a combination of these factors," says Aylon Pesso, a Boston-based orthopedic fitness trainer.

In part, blame the standard cycling position—strapped in and leaned forward—itself. It innately stresses your lumbar spine (lower back), especially if you're already injured, says Scott Weiss, C.S.C.S., a New York-based sports physical therapist. Because you're not outdoors on the road or the trails and using your core to turn, steer, or coordinate the bike, you can wind up putting even more pressure on your discs in class, he says. Also, if you're vying for that top spot on the leaderboard in every class, you are probably working dominate muscles past the point of fatigue, which can cause other muscles to overcompensate, straining your lower back, says Pesso. (P.S. Here's an Ancient Trick for Beating Back Pain)

Adding insult to injury, since most people spend their days sitting, your hip flexors are already predisposed to shortening and tightening, says Pesso. Then think about the actual workout, which includes a form of sitting as you bring your knees up and down. "While we may not be actively engaging the hip flexors throughout the movement, they are still shortening and contracting," he says. These tight hip flexors? Yep, you guessed it. They, too, can contribute to that lower back pain.

How to fix the pain and prevent it later

You don't need to hop off the saddle for good. Sidestepping pain comes down to mastering good form—the fundamental aspect of which is a straight spine, says Weiss. "As we push through a hard class, we have a tendency to slump and crunch down," says Pesso. But bend your lower back, and you'll feel it in your lower back, he says. Pretty straightforward. This is why instructors urge you push your chest forward, pull your shoulders back, and keep your arms long and straight, he says. Feel free to readjust if you need to. "Lift your butt off the seat for a second, and tilt your hips forward to keep a straight line from your hips to your head."

A proper bike setup also sets you up for pain-free success in the studio, says Weiss. What to check for? Make sure your knees aren't coming up too high and aim for a 90 percent extension in your leg at the bottom of the pedal stroke, suggests Jess Bashelor, owner of The Handle Bar Indoor Cycling Studios in Boston, MA. As for the bike itself? "The handle bars should be a few inches higher than the saddle, but ultimately the height should be based on comfort and posture," she says. (Whatever will get you to a straight spine.) How far forward or behind you are from the peddles is also crucial. "When you're at the front of your pedal stroke, your knee should be positioned pretty much directly above the ball of your foot."

A lot of the stretches your instructor already does at the end of class—like a Stork Stretch for your quads and a Figure Four for your hip flexors—can help mitigate pain, but flexibility is the key to longevity in cycling, says Weiss. So consider tacking on these three stretches to your cool-down routine. (The right kind of cross training can make sure you're as strong and flexible off the bike, as you are on it. Check out These Cross-Training Workouts That Were Made for Each Other.)

Kneeling Hip-Flexor Stretch
Kneel on right knee, with toes down, and place left foot flat on the floor in front of you, knee bent and aligned with ankle. Place hands on left thigh. Press hips forward until you feel tension in the front of your right thigh. Extend arms overhead, with elbows close to head and palms facing each other, and slightly arch your back while keeping your chin parallel to the ground. Hold for 30 seconds, then switch sides.

Doorway Stretch
Stand slightly in front of a doorway and place arms on either side of doorway or adjacent wall. Bend elbows at 90 degrees, keeping upper arm parallel to the floor. Lean forward and hold this position for 30 seconds.

Modified Lizard Pose with Quad Stretch
Begin in lizard pose. Come up off forearms and onto hands. Turn left foot out at a forty-five-degree angle and roll onto the outer edge of the foot. Use left hand to push against inner left thigh, opening up hip. Hold for a few breaths. Bend right knee and catch the pinky toe edge of the right foot with the left hand. Pull to stretch the quad. (The Best Yoga Poses to Open Your Hips may also help.)

One more thing: If you have a physioball on hand, hang over it with your stomach to the sky for a full supine stretch, suggests Weiss.