The All-Natural Sports Drink That Boosts Your Performance

Researchers found that a specific kind of vegetable juice increases the blood flow to your muscles. Here's how to use their findings to dominate every workout. 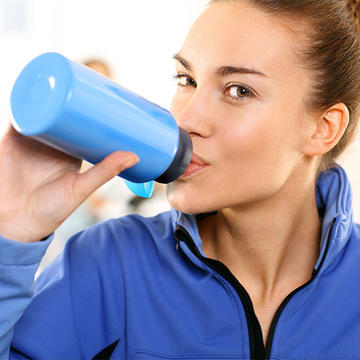 Beetroot juice—literally beets that are juiced—may give you an extra edge during workouts and races. A slew of new research finds that consuming the all-natural sports drink boosts athletic performance.

How exactly do beets do this? "Beets are a rich source of nitrates, which the body converts to nitric oxide," says Scott Ferguson, a PhD candidate at Kansas State University. Nitric oxide is a potent vasodilator, which means it widens blood vessels. As a result, blood and muscle-powering oxygen can flood into your muscles, giving you a greater edge on the field, on the road, or at the gym. "For athletes, this translates to increased time to fatigue," Ferguson says. A Kansas State University study found that consuming nature's sports drink resulted in a 38 percent greater blood flow to skeletal muscles during exercise, especially fast-twitch muscles that allow you to perform quick, explosive movements and that tend to fatigue more rapidly. In other words, beets help you push harder, longer.

Researchers are still working to calculate the exact amount of beetroot juice you need based on multiple factors, including the type of activity you're doing. As a general guideline, Ferguson suggests downing 70 mL of a concentrated beetroot juice product such as Beet It Sport or about 500 mL (16 ounces) of beet juice that you make on your own. The key is timing it right. "You'll miss the boat if you consume it 15 to 30 minutes before exercise," Ferguson says. "It takes two to three hours for plasma levels of nitrate and nitrite to peak." Bottoms up!