The Truth About Static Stretching

Stretching can make or break your workout. Here's the final word on static stretching and dynamic stretching, plus how to take advantage of both for a better, injury-free workout. 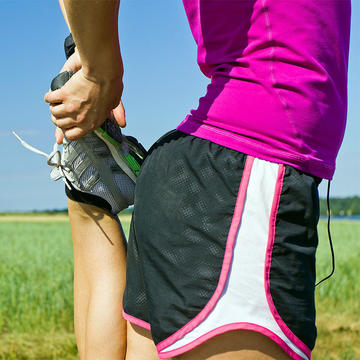 Try to touch your toes. Now, hold that position. That used to be part of every exerciser's pre-workout routine. And it might still be a part of yours. But fitness professionals are finding that this type of stretching (known as static stretching) is best left until the end of your workout, says exercise physiologist Jacque Crockford, MS, CSCS, a fitness expert with the American Council on Exercise. In fact, the American College of Sports Medicine has specifically advised against static stretching before workouts and competitions, and the European College of Sport Sciences has issued a statement saying that such static stretching could "diminish" athletic performance. Surprised? Let's review the latest research.

In recent years, a mounting body of evidence has shown that performing static stretches before a workout is like stretching a frozen rubber band: It pulls apart and weakens the fibers, says Steve Saunders, founder of Power Train, a sports training facility that works with professional, collegiate, and everyday athletes. For example, in one Journal of Strength and Conditioning Research study, researchers found that static stretching before performing a squat may reduce lower-body strength and stability. Likewise, when researchers examined 104 studies on pre-workout static stretching for a review published in the Scandinavian Journal of Medicine and Science in Sports, they concluded that static stretches reduce strength, power, and explosive performance. The authors wrote that you should avoid static stretching before a workout.

Still, another review—this one published in the European Journal of Applied Physiology—says static stretching isn't always bad, it's more about how long you hold the stretch. When people held stretches for less than 90 seconds, there weren't any negative effects. Similarly, when researchers reviewed 106 stretching studies for a Medicine & Science in Sports & Exercise review, they concluded that the "detrimental effects of static stretch are mainly limited to longer duration" stretches—those that last for at least a minute. Holding stretches for less than 30 seconds seem to be fine, according to the research.

But "no detrimental effect" doesn't equal "benefit," right? Enter: Dynamic stretches. Dynamic stretches—such as walking lunges, leg kicks, and overhead reaches—before your workout can improve your exercise performance, says a review published in the European Journal of Applied Physiology. "An active, dynamic warm-up is a better way to prepare the body for activity, as this type of stretching helps to increase body temperature, enhance joint flexibility, and increase muscle elasticity through a range of motion, functionally preparing the body for the activity to come," Crockford says. The result: Increased speed, agility, and reduced risk of injury.

So before your workout, Crockford suggests doing dynamic stretches that work the same or similar muscles as those of the workout you're about to perform. "For example, running requires the use of your calves, quads, hamstrings, and hips, which means calf-raises, squats, knee hugs, lunges (forward, sideways, and backward) will be particularly helpful."

Also, whatever your workout—running, spinning, weight lifting, swimming, it doesn't matter—it's helpful to perform a five- to 10-minute aerobic warm-up before hitting your dynamic stretches, says Saunders. He suggests running some sprints, biking at a fast pace, or exercising on the elliptical at a high resistance. "You'll know you're warm when your muscles are no longer tight — you can jump higher, kick higher, and you are starting to break a sweat," Saunders says.

Once you wrap up your workout, you can perform static stretches. Doing so can help you cool down, decrease muscle tension, and increase muscle relaxation, Saunders says. Hold each stretch for about 30 seconds. Your entire post-workout stretching routine should last about five to 10 minutes, he says.