Running Sneakers Change the Muscles In Your Feet 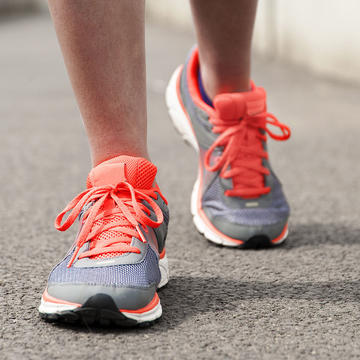 When the "barefoot" or "minimalist" footwear trend became a thing a few years ago the idea was to take us back to the way our primal ancestors ran, forcing the foot and ankles to work harder to support the body, rather than depending on tons of support and cushioning.

In fact, some researchers went as far to suggest that these modern running shoes with cushioned midsoles may actually hinder running performance by altering the natural spring-like function of your foot, causing your foot and ankle muscles to work less, weaken over time, and become more predisposed to injury. (More on that: Is Barefoot Running Worth the Risks?)

Researchers at the University of Queensland decided to put the hypothesis that running shoes impair your foot function and weaken your feet to the test in a new study on the mechanics of running, published in the Journal of the Royal Society. They used special sensors to track the muscle activity in the feet 16 healthy recreational runners while they ran on a treadmill barefoot and in an Asics cushioned stability running shoe.

The researchers found that when the volunteers wore the running shoes, their arches didn't compress as much (aka they did their job to support and cushion the feet). And, contrary to previous claims, they found that rather than making your foot muscles weak and lazy, the arch muscles were actually working harder in sneakers in order to compensate for the cushioning and maintain stability.

"The surprising part was how the muscles respond running in shoes," lead study author Luke Kelly, Ph.D. told the LA Times. "Shoes don't block muscle function—we see more activation in muscles when we run in shoes than when we don't."

So yes, running shoes do indeed influence the mechanical function of your foot, but in a good way. While this small study probably won't make minimalist sneaker lovers switch over to a super cushiony pair, it's nice to know that your supportive sneaks certainly aren't destroying your running game.