How to Choose the Right Running Chews and Gels for You

Fuel your best run ever. 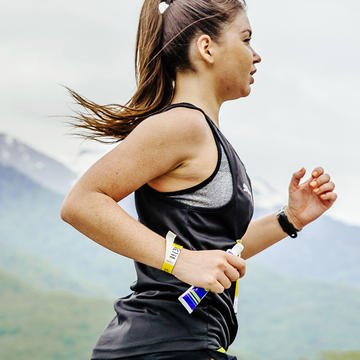 Here's a fun experiment: Walk into your running store's nutrition aisle and then, super quick, take a peek at your fitness tracker. Is your heart rate rising? It's no surprise if it does because, well, the number of running gels, chews, drinks, and tablets on the market these days is crazy overwhelming. And, of course, every package claims to pack the best fuel ever.

"As the running craze has taken off, so have the fueling options out there," says Pam Nisevich Bede, M.S., R.D., a sports dietitian with Abbott. "Some of these arise as new science emerges, but most of them are there because runners simply want options and every gut is different."

So, yeah, that whole "run your own race" concept needs to be applied to your nutrition strategy, too. Joan Benoit Samuelson, winner of the first-ever women's Olympic marathon in 1984, recommends using your training runs as an opportunity to test out various fueling options. So rather than tricking just your pace, distance, and duration, also make a note of what you eat and drink. Write down the brand, type, even the flavor. Did it contain fructose? Gelatin? How much did you drink, and how often? And how did it make you feel?

Over time, you'll be able to identify what works best, says Samuelson. For instance, you might feel really energized with a certain brand's gels, but get runner's trots when something contains caffeine. (PS: This is why running makes you have to poop.) By the time race day comes around, you'll have pinpointed the best fuels for you—and will be able to toe the start line with confidence.

Ready for more fueling tips? Here's everything you need to know.

The faster or farther you run, the more carbs you need.

As a general rule, most women need anywhere from 30 to 60 grams of simple carbs per hour to keep their blood sugar and glycogen where they need to be for optimal performance, says Nisevich Bede. But that's not exactly a small range. So she recommends that, if you are running at an easy or recovery pace, you stick closer to 30 grams and, if you're pushing the pace, opt for 45 to 60 grams per hour. Start supplementing early, too—about 30 to 45 minutes after you begin—to maximize the benefits. And if you're running for less than an hour, it's cool to skip the supplements altogether.

"Hydration is probably the single-most important fueling concern for any athlete," says Benoit Samuelson, who constantly has to remind herself to sip water during her runs, even when she isn't thirsty. That's because "drier and hotter climates call for more fluids, but humid days can cause sweat-fests, too. Any of these conditions mean that runners need to hydrate and replace the electrolytes they're losing in sweat." After all, electrolytes are crucial not only for proper cell signaling, but also helping your body absorb fluids. (Side note: Should you start spitting out your sports drink?)

Nisevich Bede says to aim to drink at least six to eight ounces of fluid every 15 to 20 minutes during your run, increasing fluids even further if you find yourself losing more than a couple of pounds in water during your runs. (You can weigh yourself when you get home to help monitor.) Traditional carb- and electrolyte-containing sports drinks, as well as "hypotonic drinks"—those designed for quick rehydration and electrolyte provision, but not carb replacement—should be your first line of defense. If you're still suffering from low levels of electrolytes—sometimes evidenced by cramping—then consider salt tablets or combination electrolyte tablets, which contain a mix of sodium, chloride, and potassium.

Caffeine is a popular aid for enhancing performance, and Nisevich Bede says it's well-researched and effective. "But if you're not a habitual caffeine consumer or coffee drinker, you'll want to experiment with dosage to see how your body responds," she warns. "Too much can cause jitteriness, palpitations, or GI distress, all of which can wreck your race."

Many gels or chews have more than 25 to 50 mg of caffeine per serving. Start small, with one dose per hour and, if that sits well, try ramping it up to two per hour. Alternatively, you can try consuming some caffeine—either from a gel or straight-up coffee—about 30 minutes prior to pounding the pavement. Benoit Samuelson likes to have a cup of joe (containing roughly 95 milligrams of caffeine) prior to her runs. "It gives me the little jolt of energy that I need to start my workout," she says. (Check out these 8 health benefits of caffeine.)

Whether you have a sensitive stomacho or a gut of steel, it's important to make sure that fructose, a simple carb that's naturally found in fruit, isn't the only simple carb that you're using for fuel. "Fructose alone is not well tolerated during intense exercise," says Nisevich Bede. "That's why a lot of fuels contain a blend of glucose and fructose. It helps runners absorb more energy each hour."

That said, some people have a known fructose intolerance, or find out through running that fructose-containing gels don't sit well with their stomachs (another reason it's important to test your nutrition before race day). If that's the case, Nisevich Bede suggests looking for glucose-only fuels, as more of those options, like Glukose Energy Gels, are hitting the market.

Be aware of vegetarian and vegan options.

Gelatin is a popular ingredient in gummies and energy chews, but for vegans and some vegetarians, this animal-based ingredient is a big no-no. In that case, Nisevich Bede recommends considering a maple-syrup based product, like UnTapped, or even dried fruit mixed with sports drinks to prevent fructose-only fueling disasters.