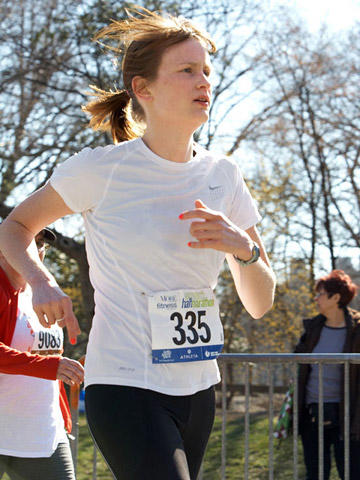 You're an advanced runner if...you've logged 35 miles a week for the past two years, you can run 10 miles at a time, and you have run a half-marathon. The Run a Personal Record advanced plan includes speed-building runs that will boost your ability to maintain a faster race pace.

Graduate-school student Rachel Gottschalk, 28, started doing half-marathons a few years ago after setting a New Year's goal to run two days a week. "It was a way to relieve stress," she says, and it soon snowballed into an almost daily habit. She has been hooked on running and racing ever since and had completed four half-marathons before signing up for the MORE/FITNESS Women's Half-Marathon. "I'm always looking for a new goal to work toward, so it became about doing a faster pace," she says.

Hit the accelerator
"Tempo runs are the key to kicking up your speed," says Kislevitz, who created the Run a Personal Record advanced half-marathon plan Rachel followed. "These are workouts in which you increase your pace almost to the point at which you feel as if you can't keep it up much longer; it's a comfortable-hard level." During a 40-minute tempo run, for instance, build up speed so you hit your comfortable-hard race-day pace midway through; gradually slow down to finish with an easy five- to 10-minute jog. Doing consistent speed work was new to Rachel, but it "helped me learn what a faster pace feels like and how I can push through it."

Have a plan B
Rachel's motivation trick was to have two goals in mind for race day: a "stretch" goal of 1:45, or six minutes faster than her best finish, and a "confident" goal of around 1:48. "Keeping up as fast a pace for the second half of the race is always the hardest part for me," she says. But giving herself a three-minute range to fall within meant she would be all smiles at the finish line no matter what.

Practice eating
The golden rule in racing is "Nothing new, only tried-and-true," Kislevitz says. "Test any form of food — energy bar or sports gel — during practice runs to make sure your stomach won't react negatively to it on race day." And refuel before you think you need it — about every 45 minutes or at mile five or six and again at mile 10 or 11, Kislevitz adds. Rachel had 100 calories and 25 grams of carbohydrates twice during the half-marathon; she used the Gu Energy Gel packets.

Keep your tank full
Even when you're looking to shave every second possible off your pace, maneuver your way to the water stations every 15 to 20 minutes along the course, whether you feel thirsty or not. "Being dehydrated will only sap your body's energy," Stoler says. Have about five to seven ounces, or roughly five to seven sips, of water each time. After the first hour, try to get in electrolytes and carbs through your fuel or from a sports drink.