The larger-than-life TV trainer is actually petite, pretty, and potty-mouthed off camera. Here Jillian Michaels reveals the real reason she left The Biggest Loser, the one exercise she hates but never skips, and the pro trick that will supercharge your metabolism.
By Stephanie Dolgoff 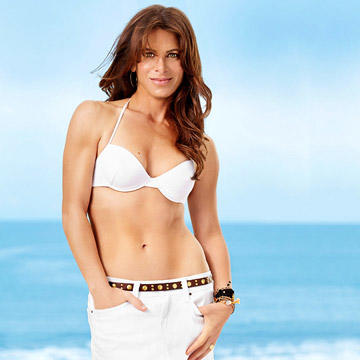 Jillian Michaels on Exercise and Staying Fit and Motivated

"Oh, God, let me take a few of these off," says Jillian Michaels, carefully removing all but two croutons from the Caesar salad with grilled shrimp (dressing on the side) that she ordered for lunch. Noticing the waitress's stricken face, she's quick to add, "I wanted them; I totally wanted them. I'm just taking a few off so I don't eat them all. Thank you so much."

The thing about Jillian is that she's nice. Surprisingly nice. But still, she's not about to do something she knows is wrong for her, whether it's eating too many carbs or sticking with a job that no longer makes her happy. "The worst advice I ever got was to be diplomatic, because it compromised my authentic truth. Don't fight this; don't stand up for that; be a good girl; don't be a troublemaker — [bleep] you!" says the 37-year-old trainer turned fitness mogul. "Every mistake in my professional career came when someone told me not to rock the boat, not to get into trouble," Jillian says. She shakes her head at the memory, but only for a second. Jillian is the last person to dwell on the past; after having been horribly bullied and overweight in her teen years, she's learned to channel the feeling of helplessness into swift, decisive action. "Always follow your gut and what's in your heart," she says.

That's how Jillian knew it was time to leave The Biggest Loser this past May after 11 seasons on the show. "People tried to talk me out of it. 'Oh, really...? Are you sure that's a good idea? What are you going to do if you're not famous anymore? What about the paycheck?' I'm not going to be intimidated into staying," she says. "I know what's in my heart."

Turns out, after years of pushing contestants to live up to their full potential, Jillian doesn't believe she has lived up to her own. "I'm thinking about my legacy," she says, twisting her bracelet, a tiny evil eye on a red cord that client Rita Wilson gave to her to ward off nasty spirits. "I don't feel I've given back to the world yet, and the world has given me so much," she explains.

No surprise then that she's lined up her next big project. Starting in September, Jillian will cohost the daytime talk show The Doctors , where she's looking forward to having "a direct connection with viewers to provide them with information, motivation, and support." She will also be a special correspondent on Dr. Phil.

And that's not all she's got planned. Among Jillian's other goals: to rid the nation's food supply of genetically modified foods (she staunchly believes in eating organic); to raise money for the troops overseas; and to promote her life makeover book, Unlimited: How to Build an Exceptional Life, her K-Swiss line of workout clothes, and her DVDs. And oh, yes, she's in the process of adopting a baby from the Democratic Republic of the Congo.

"Whenever I feel dissatisfied and unfulfilled, I make a course correction," Jillian says firmly. "I move, I grow, and I evolve." She shares how she does just that in every area of her life — and how you can, too.

Do you feel pressure to be in perfect shape?

There's definitely a lot of pressure, but I kind of like it because it's an incentive for me to keep on track. I'm so far from perfect. There's a misconception that I'm at the gym every day.

I usually go to the gym three to four times a week. I work out hard when I go. I just kill it, whether it's doing kettlebells, mixed martial arts, Spinning classes, or power yoga. I get bored easily, so I need something that's going to keep me focused. I mix it up. Everything I do is a combo of body resistance and cardiovascular endurance.

Does it drive you crazy when you don't get to exercise?

I feel aggravated. But I don't bug out about my body, because I know how to get myself where I need to be in two weeks.

My abs. God made it very easy for me to get my abs lean.

My ass! I hate it! There's cellulite on it, and no matter what I do, I can't get rid of it. The reality is that it's connective tissue. I can starve and my boobs will go and my face will get gaunt, but I will still have cellulite. It's not so much about aesthetics for me these days. Instead, I think a lot more about the mark I'm going to make on the world than about the back of my ass.

What do you consider workout heaven?

Mixed martial arts. I love it. I like to do fun stuff that's challenging.

A marathon. You're at mile 20, and you have six more to go, and your body is just battered and bleeding and miserable. I would rather be dead.

What one thing do you never skip in your workout?

This is ironic. As much as I hate it, I run every time, like three miles. It makes you skinny, that's why. It works.

What's the best way for someone to motivate herself to get fit?

Ask, What do I want? For a twentysomething, it might be to wear a bikini. For a 70-year-old, it might be to live to 100. Next, form an emotional connection to your goal. Then when you choose between a bagel and egg whites for breakfast, you make the choice with your goal in mind. That's what I do. I'm extra­ordinarily mindful about making decisions.

Are you that disciplined in every area of your life?

No. I wasn't with my finances, and what a huge mistake that was. I got involved with some bad investments, and now I'm learning to take responsibility for my money. You have to be present and responsible in everything.

Do you think that living your best life means being fit?

I would say that you don't need to be ripped. But do you need to be physically healthy? Of course you do. That's the platform you build your life on. It's about being healthy and energized and feeling strong so you can enhance the other areas of your life.

You were overweight as a kid. Are you still influenced by an inner fat girl?

Having been the bullied kid, I have a tremendous empathy for the underdog. I struggle against that feeling of being out of control, and so I'm hyperfocused on being in control and helping others get it. I don't have sympathy for the underdog, though. I feel like that's, Aww . . . you are weak, poor you. [Bleep] that! I will say, it's not easy to make a change. I understand that. It's not easy for me, either. But you can do it.

You're a control freak. How do you think motherhood will change you?

I'm sure it'll be extraordinarily humbling — being confronted with all the things you don't know, being worried about not making the right choices. But I imagine that it's going to force me to unplug. I'm looking forward to that.

How will your parenting style differ from your training style?

It's constant positive reinforcement with kids. There are rules and accountability, but would I ever use fear to circumvent a negative behavior pattern? No! Everyone thinks that I go around yelling at people. The Biggest Loser is crisis mode. People are hundreds of pounds overweight. I'm running an intervention on that show. I don't go through life that way.

You're so confident. Do you ever feel insecure?

Doubtful! Tell us one thing you suck at.

Everything! [Laughs.] Everything except this job. I can't cook. I can't dance. I can't sing. I can't play an instrument. I have no artistic ability. I'm almost like a savant. I know my job, and I'm meant to do what I do. But with everything else, I'm a work in progress.

What advice do women always ask you for?

They get caught on plateaus. In that case what you need to do is give yourself a couple of days of rest and bump up your calories by 10 percent. When you lose weight quickly, your body often responds by releasing hormones to increase your appetite and store more fat. That's a survival instinct meant to help us conserve fuel during times of famine. You can outsmart it by eating a little more and resting. That usually helps jump-start your metabolism again.

Number one is that people don't educate themselves. They do things like the latest diet craze. Learn about lasting programs that have shown consistent results. Then take deliberate actions to make your dreams come true. Don't be impulsive and do something that's going to backfire. That begins a vicious circle of, I'm a failure, nothing works for me.

Is it possible to have the perfect body?

No. What you can have is your ideal body. I think people need to stop focusing on body image and start focusing on health. When you do that, it's all going to fall into place.