On a Roll: How Isla Fisher Stays Lean, Serene, and Strong

With two young kids and two hot movies, Isla Fisher doesn't have time to obsess about her weight. Learn her body-confidence tricks, and try the workout that keeps her lean, serene, and strong.
By Patty Adams Martinez 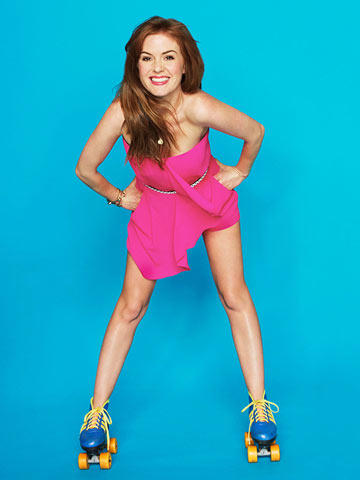 You'd never know it, but actress Isla Fisher is running on just three hours of sleep. The mom of two daughters, Olive and Elula, ages 5 and 2 (hence the lack of shut-eye), walks into the L.A. celebrity hot spot Chateau Marmont at 9 a.m., bright-eyed and smiling, and launches into conversation. Isla, 37, aka Mrs. Sacha Baron Cohen, is in a great mood; she punctuates nearly every sentence with a chuckle.

It's no wonder she's so happy. Isla is starring in two big movies this spring: The Great Gatsby, which opens in early May, and Now You See Me, at the end of May. And she's psyched, even a bit in awe, to be on the cover of FITNESS. "I still can't believe someone thought that was a good idea!" Isla says, shaking her head and giggling.

While she's not a huge fan of the gym — "I'm an outdoor girl," she explains — Isla stays active pretty much all day long. "I have a lot of natural energy," she says. "I'm always moving. I do yoga, and I love to hike. And I swim every day with my kids."

Isla admits, though, that staying in shape can be a struggle for her. "After giving birth to my daughters, I realized I had to do more to keep the weight off," she says. Here she shares how she dropped 70 pounds post-baby.

You practice yoga five days a week. What's the biggest benefit you get from it?

Not only are you strengthening your muscles and releasing tension, but yoga also gives you a mind-body experience. When you're really focused on your breathing, you're able to clear your head, and all the worries of everyday life go out the window. I love that feeling of being connected with my own body.

It's also incredibly calming. If I'm stuck in traffic or have a bad moment in my day, I go back to my yoga practice and I breathe. Sometimes I solve a problem that was bothering me, like deciding whether to take a role in a movie. There is some­thing about breathing into all of the tense places in your body and releasing them that frees your mind.

How has yoga changed your shape?

I'm more toned. Every woman likes her tush in jeans when she's worked on it a little more!

You wear some sexy outfits in The Great Gatsby. What body part were you especially proud to show off?

Actually, I gained weight for that role because Myrtle, the character I play, is supposed to be heavyset. So I ate lots of protein, and I gained 15 pounds. It mainly manifested itself in my boobs, which was very exciting. Sadly, that's gone now.

Tell us your secret for losing the baby weight.

I gained 65 pounds with my first baby and 70 with my second. I had severe morning sickness both times, so I mostly ate supersize bowls of white pasta with loads of butter and cheese because that was the only thing that took away the nausea. I also ate late-night cornflakes, Häagen-Dazs ice cream, and scones with jam and cream.

I had to shoot Confessions of a Shopaholic about three months after I gave birth to Olive, so the producer, Jerry Bruckheimer, hired a trainer to work with me three times a week. That was both inspirational and terrifying because I didn't want to let the trainer down. After I had my second daughter, I slowly lost the weight by breastfeeding, hiking Runyon Canyon, and working with a trainer every couple of weeks.

Hollywood is obsessed with weight. Do you get on the scale regularly?

I don't even own a scale. I have two young girls, and I wouldn't want them to see me weighing myself all the time. I don't think it sends the right message.

My stomach. Even though it will never be flat again, it's still my favorite because it reminds me of my greatest achievement: my babies.

Is there a part you feel you'll forever be working on?

Originally published in FITNESS magazine, May 2013.