All the Right Moves: How Glee's Heather Morris Stays Fit

Heather Morris, the dancing phenom and queen of deadpan delivery on Glee, has one of Hollywood's fiercest physiques. Steal her dance-inspired workout for sleeker, sexier legs.
By Patty Adams Martinez 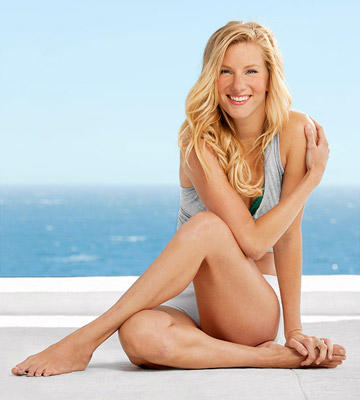 Heather Morris is full of surprises. I'm expecting the bouncy, booty-shaking cheerleader from Glee, but when Heather slides into the booth across from me in Ca Va restaurant in New York City at 9:30 a.m. on a Thursday, she seems...sleepy. Heather, 24, immediately orders coffee and apologizes for being so low-energy, explaining that she had stayed out partying till 3:15 a.m. with her Glee costars. "I'm so mad at myself. I can't believe I did it! I usually like to get eight hours of sleep, but hey, I'm in New York!" Heather says. "I'll go home and sleep 10 hours every night this week to make up for it."

We get to chatting about her favorite subject — her boyfriend, Taylor Hubbell, a baseball player for the University of Louisiana at Lafayette — and Heather drops this bombshell: She would give up her amazing career, if that's what it would take, to live happily ever after with Taylor. "I want to marry him so bad," Heather says. "That's what I really care about. I want to marry Taylor and have kids with him. I love acting, but if it affects my relationship, then I won't continue doing it."

But the biggest who-knew moment is yet to come. Just before our cover photo shoot, Heather, who has a lithe and gorgeous dancer's body, suddenly reveals to a FITNESS staffer that she had breast implants and that she hated them so much she recently had them removed. "Implants were something I thought I wanted when I was younger, and now I don't," Heather says. "It was hard being active with them, because my chest was always sore. It hurt a lot, and I didn't like always being in pain, so they had to go!"

Heather has a habit of doing and saying things that make heads turn. A former backup dancer for Beyonce, she ended up at Glee when a choreographer she knew who was working on the show asked her to teach the actors the dance moves to Beyonce's hit "Single Ladies (Put a Ring on It)." Coincidentally, producers were trying to cast the endearingly ditzy cheerleader role of Brittany at the same time; they liked Heather so much that they offered her the job. It was supposed to be a nonspeaking part until producers discovered that Heather had a talent for delivering one-liners. (Her favorite Brittany-ism: "'Did you know that dolphins are just gay sharks?' The rest of the cast was dying, because they said I delivered the line like I really believed it!") Now she's one of the most popular characters on the show.

Over an egg-white frittata Heather tells me that because her career "is in a good place," she's busy planning her off-screen pursuits. She has vowed to go back to college to study dance and sociology by the time she turns 30. And she is determined to run her first half-marathon this spring. "I like challenging myself," Heather says. "And nothing feels better than setting goals and then accomplishing them. I just want to learn everything — and have fun doing it."

What's the secret to your amazing body?

Twenty-three years of dancing. My mom says I started dancing along with my older sisters, April and Crystal, at their dance classes when I was 1.

Are there any workouts you're dying to try?

The Tracy Anderson Method [a routine that incorporates aerobics and dance moves]. Gwyneth Paltrow promised she'd take me, but she's so busy that we've yet to go. Gwyneth has a killer body, so I'm willing to try whatever she does to look like that! She's so cool and down-to-earth, I feel like she's my sister.

You started out as a backup dancer for Gwyneth's BFF Beyonce. Did they ever compare notes about you?

Gwyneth told me recently, "I saw Beyonce, and we talked about you all night." I have no idea what they spoke about, but I'm hoping all good things. They better not be talking crap behind my back!

What did you learn about being a performer from Beyonce?

That putting in the time really pays off. Beyonce is so focused. We'd have 12-hour days of nonstop dancing, and she was right there next to us from start to finish. I think that's why she's so mesmerizing on stage; she gives everything her all.

You tried out for So You Think You Can Dance? in 2006, but you didn't make it. Was that disappointing?

At the time, yes. But even then I could sense that it wasn't right for me. Producers wanted us to talk a lot and get emotional, but I like to keep my emotions private, so reality TV and I just didn't mesh. I went home and kept practicing. Dance has always gotten me through hard times. My dad passed away when I was 14, and I worked through my grief with dancing.

A week — and it kills me. My body feels stiff and tight when I don't work out, and my stomach starts to hurt as my metabolism slows down.

Do you see a difference in your mood when you don't get to the gym?

Definitely. When I'm working 16-hour days and I can't work out, I get angry very easily. It's because I'm missing all those good endorphins. For me, exercise equals happiness.

You don't believe in diets. Why not?

Dieting is just not good for your body or mind. I don't think you should ever tell yourself you can't have something you want. You can't have cookies at every meal, but you can have a cookie. If you deprive yourself, that's just going to make you binge and eat the whole bag. I believe in listening to your body. When I eat fries and burgers for a while, I crave vegetables and fruits. I cut out the carbs and the processed foods until I feel good again. Your body tells you when you need to get back on track. Gas, bloating, and stomachaches are all your body's way of sending you signals.

What's in your fridge right now?

I usually have a lot of protein, especially chicken and fish, and vegetables, fruits, and almond milk. I eat pretty well. My big splurge is Tex-Mex food. I especially love my mom's taco salad. It's my ultimate comfort food.

What songs are on your iPod?

Anything by Chris Brown. I also really like Arcade Fire's "No Cars Go," Goldfrapp's "We Radiate," and "Black Sheep" by Metric.

What dance move should every woman know?

Beyonce's booty shake. I say that because my boyfriend, Taylor, really likes my butt!

How did you two meet?

We went to the same high school in Arizona, but we didn't know each other. We didn't start dating until I moved to L.A. He saw me on Myspace, so he messaged me a few years ago. But we've broken up and gotten back together because long-distance relationships are hard. He's moving to L.A. soon. We're dying to be together!

I have a heart-to-heart with myself. I say, "Maybe I shouldn't have eaten that dessert." And then I say, "Whatever. You're going to have a really good apple later, and you're going to work out tomorrow, and it's going to be awesome." Sometimes you just have to give yourself a pep talk. It's exhausting when you're always critical of yourself. Just love who you are!