One Hot Mama: How Alison Sweeney Got in the Best Shape of Her Life

Despite a crazy schedule that includes juggling two kids and two jobs, Biggest Loser host Alison Sweeney is in the best shape of her life. Learn her time-saving, stay-slim strategies.
By Shelley Levitt 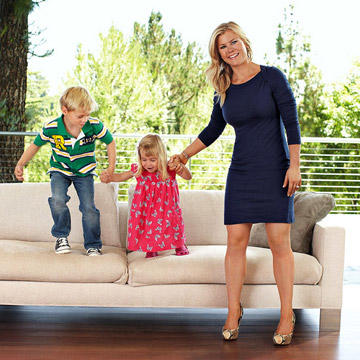 Alison Sweeney knows a thing or two about body confidence. Take this morning, when she stepped out of the shower in front of a dozen crew members on Days of Our Lives. It doesn't get much more intimidating than that, but such moments are all in a day's work for Alison. "As an actress, you know these kinds of scenes can come up at any time, so you have to stay in great shape," she says. She admits, though, that it hasn't always been easy, which is why she has a strong camaraderie with the contestants on The Biggest Loser, the blockbuster show she's hosted since 2007.

Alison was just 16 when she started on Days, and for the first decade she struggled publicly with her weight. Hollywood casting agents called her fat. After trying dozens of diets Alison finally began eating healthy foods and doing almost daily exercise sessions. It worked. She went from a size 12 to a 2 or 4, maintaining her weight for the last decade, except when she was pregnant with Ben, now 6, and Megan, now 2. Inspired, Alison wrote a book about motherhood and weight called The Mommy Diet, which is about to come out in paperback. At age 35, she's fitter than ever.

Over a bowl of oatmeal and skim milk at her favorite cafe, Alison told FITNESS how she does it.

With two shows, a hectic filming schedule, and two kids, what's your secret for fitting in workouts?

My weeks are always different, so part of my challenge is finding ways to exercise within the chaos. I can't say I'm going to work out five days a week, because if I'm a day short, I'll feel like a failure. Instead I made a deal with myself that I would work out every day that I had time to, no excuses. Each night I figure out how I'm going to exercise tomorrow. Work out at home with a Bob Harper or Jillian Michaels DVD? Grab a quick workout at The Biggest Loser ranch? Take my favorite Spinning class at the gym? Or go on a hike with the kids, where I'll do some squats, lunges, and jumping jacks while they're playing?

You credit your husband and kids in your weight-loss journey. What did you learn from them?

My husband, Dave, taught me not to tie my self-worth to what I eat. Women attach all these emotions to a plate of food. Men don't. Whether or not you eat too much sugar has nothing to do with what type of person you are. I also love that my kids will wear themselves out. They'll stay in the bouncy house until they're drenched in sweat and I drag them out. Adults too often just sit on the sofa and watch TV.

Do you ever freak out when you have to film a scene in which you're wearing almost nothing?

I get a case of nerves. But I feel really proud of how hard I've worked to look good and be fit and athletic. So today when I had that shower scene I thought, I can be really self-conscious and make everyone uncomfortable. Or I can just go out there and have fun. And that's what I did.

The weigh-in is a huge moment on Loser. Yet you don't use a scale. Why not?

When I was younger I let the scale define me. Paying attention to the way my clothes fit, my ability to compete in a class, or whether I'm out of breath getting up a hill I ran easily last week — those all feel like healthier ways for me to stay in check.

If your jeans start feeling tight, what do you do?

I should be eating 1,500 calories a day. So if my clothes don't fit, I'm aware of exactly what I did to get there: I went to two birthday parties and had cake at both, for instance. My rule is I do not lie to myself about what I'm eating. Instead of beating myself up, though, I look ahead to the next step. So I'll cut out the extra stuff and exercise more.

Do you give in to cravings when they strike?

From time to time. My biggest weakness is homemade desserts. But I try to keep portions under control. I was at a friend's birthday and she had these gorgeous cupcakes. I knew that one of them was about 500 calories, so I cut it in fourths and had a piece. That bit was completely satisfying.

You've worked out with both Jillian and Bob. Were they tough on you?

When Jillian trained me, she was merciless, but she never failed to compliment me. As women, we tend to downplay our achievements, but Jillian taught me to celebrate them. Bob showed me that I could do more than I thought. One day I'd been on the treadmill for 40 minutes. I was about to get off, when he asked, "When are we running sprints?" He proceeded to put me through this intense circuit. It turned out I ran at a 10 inclination and a speed of 10 miles per hour. It was the toughest thing I'd ever done, but I learned to let go of my preconceived notion of my limits.

If you were a contestant on Loser, how would you do?

I'm an extremely competitive person. I have to believe I'd make it all the way to the end.