Nike's New Court Dress Is Proving Problematic for Some Players

There are mixed feelings about the babydoll style on Wimbledon's classy grounds. 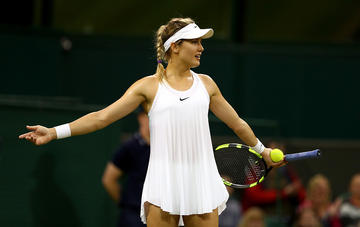 Wimbledon is in full swing, the women's second round is under way, and Nike's new NikeCourt Premier Slam Dress ($100; nike.com), which outfits several players, is causing a few waves for being a departure from the usual top-and-skirt combination. It's been referred to as a babydoll style—loose and short, with a flowy fit.

Nike noted in its press release that the dress featured "power pleats and racerback construction," designed to work with the player's movement. Turns out it may move with the player a little too much, though, as some players complained that the dress was too revealing, especially mid-swing. This prompted some action from Nike...and of course from Twitter commenters who wanted to see the dress recalled.

This morning, though, Nike rep Matthew Kneller told TODAY that despite some unrest, the dresses will not be recalled. "We work closely with our athletes to provide them with product that helps them perform and feel their best on the court," he wrote.

The Daily Mail reported that athletes were asked to return their dresses to Nike prior to Wimbledon for "a small change," which ended up being the tailors sewing up the slits on each side of the dress. It is not a really a recall, but it certainly started the conversation about whether the dress was court-worthy.

According to the New York Times, Nike also offered a more traditional skirt-and-top combination, in case any players wanted to switch. (Nike's star Serena Williams didn't have to worry either way, since the brand designs unique outfits just for her). Daria Kasatkina expressed her dislike for the revealing dress and opted for the separates option, as did Sabine Lisicki. Eugenie Bouchard defended the design, saying it allowed her to be "more free" with her movements. Maria Sakkari has worn it for two wins at Wimbledon and had no complaints. So the jury is out on the success of the Premier Slam.