A new sports bra can analyze your heart rate, calorie burn, and more. But will that help or hurt your fitness routine? One woman put it to the test. 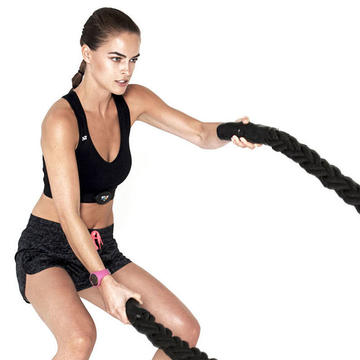 When it comes to working out, I'm a live-by-the-numbers kind of girl. I like to know what pace I'm running, how many miles I bike, and how much weight I'm lifting. The one measurement I never really paid much attention to? My heart rate.

Before you reprimand me, just...wait. I know how important monitoring your heart rate is before, during, and after a workout—and how it can improve each and every sweat session. Heck, I've even reported on it. But that doesn't mean I always practice what I preach (I'm human, #dontjudge). Not only are heart-rate monitors expensive—especially on top of the other costs associated with my fave workouts—but, well, they can be annoying. Not all wrist-dependent monitors are reliable, and I've suffered my fair share of chafing any time I've used a chest strap. And let me tell you, chafing right under your sports bra is not sexy, and it feels all sorts of torturous. Just ask anyone who's stepped under a stream of hot water without realizing they've chafed.

So when I heard about the MYZONE bra, the "smart" sports bra that debuted at CES this year, I was intrigued. Not only did it claim to store 16 hours of internal data—including heart rate, calorie burn, and perceived effort—on a single charge, but it also had a game-based platform that decoded how hard I was working during any fitness routine. If anything was going to convert me into a heart-rate-monitoring type of gal, this was it. It was time to put it through the (sweat-dripped) wringer.

The bra itself is purchased separately from the monitoring device (the thing that actually tracks my numbers), but it has the same sensors that a chest strap does, and two button-clasp points for the device to snap into. This effectively turns the bra into a heart-rate monitor, so long as the device is clipped in. While I was bummed that it didn't come with the bra (the bra is more of an add-on feature at this time), it did come with a chest strap. That I can appreciate—I like having the option to keep tabs on my stats even on laundry day—but at $70 for the bra and an additional $150 for the strap and monitor, one thing was clear: Living by the numbers wasn't going to come cheap.

As soon as my sports bra arrived, I was impressed. It runs a bit small, but I was still quite comfortable (and the girls were secure) in a medium. And it wasn't ugly AF, which was a plus. Sure, it would be nice if it came in a cute color (mine was a basic black) or a fun, strappy design. But for a bra that I would wear once a week or so, I didn't mind—function ranked over fashion here. So I laid out my clothes for Spinning class the next day, downloaded the free MYZONE app to complete my profile (that's where all my numbers would be sent), and charged the device.

I knew that MYZONE suggests anyone maintaining or working toward average health (so, not a huge fitness junkie) should aim for 1,300 MEPs per month. MEPs are the tracking metric they use, short for MYZONE Effort Points, and they work on a scale—the more effort I put in based on my heart rate, the more points I rake in per minute. Game on.

I kept my phone in the water bottle cradle so I could track how I was doing throughout class thanks to the live stream on the app. This definitely proved useful, as there were plenty of times that I considered backing off, excuses like, "I'm tired," "It's the start of class," and "It's Monday..." running through my mind. But when I saw that I wasn't getting as many points as I wanted in that moment, I pushed. At the end of my 60-minute ride, I had burned 681 calories, spent 46 minutes in "the zone," and racked up 211 MEPs. Not gonna lie, I walked out of that class with a little extra swagger in my step. This heart-rate thing was cool.

Next on my schedule was HIIT. This class moved in circuits, so having a phone nearby wasn't going to be an option, and the monitoring device itself doesn't give any sort of alert as to what zone you're in. So I was sweating blind. You'd think after doing that for so long, it wouldn't be a big deal. But I was on a heart-rate-monitoring high and suddenly felt scared to not know these specific numbers. This ended up being a double-edged sword. Not being able to track my numbers had me overcompensating at times because I wanted to make sure I stayed in the zone long enough to rack up MEPs. (Can you tell I'm competitive?) But because there were no beeps from the bra to, say, let me know when I had slipped out of a zone, I really had no idea. And then there were other times when, again because I didn't know my numbers, I thought I had worked hard enough in the last circuit, so I allowed myself to back off.

My trainer definitely noticed too. She said I seemed more scattered than usual; not as focused. I told her what was up and she quickly told me that "numbers are a great motivator, but you don't always need them. Remember that sometimes it's better to just hone in on exactly how your muscles feel in the moment, and push through." I kept that in mind as I pulled out my phone to see how I did, and she was right. While I had still burned a respectable 483 calories in 45 minutes, when I looked at the detailed summary automatically sent to my email, I saw that I was only in the zone for a scattered—not continuous—20 minutes. Meh.

Last up was a running workout, and my goal was simply to stay in the zone for as long as I could, at a comfortably uncomfortable pace, for 5 miles. Once again I had the live stream pulled up on the MYZONE app, so I could easily check in throughout my run and see how I was doing. But I wanted to take action on my trainer's advice too. So while the live stream was running, I didn't have it up continuously throughout my workout—it was just something I could toggle over to when I needed a jolt of motivation. It ended up being exactly the kick in the pants that I needed; whenever I felt tired and my mental game started to weaken, that's when I checked in with how my heart rate was doing. More often than not, I was still right in the zone doing exactly what I should be (a pleasant surprise, I admit). That gave me the motivation not to ease up or let my numbers dip. When I saw that they had slipped, I told myself that was proof right there that my body could handle more and I just needed to get my brain in the game. And yes, now and then I jumped into the 90 to 100 percent zone even though I wasn't sprinting. That was my cue that I could pump the brakes a bit to get myself back into a productive place. At the end of the day, I ended up having an extremely effective workout—earning nearly 300 MEPs—without any OMG-it-hurts chafing from a chest strap or doubling up on watches. Win-win-win.

All in all, this smart sports bra ended up having a more positive than negative effect on my fitness routine. While I won't worry about using it when I can't have the phone handy—that way I won't psych myself out—I'll definitely continue to track my stats for things like rowing, Spinning, or strength training solo to be sure I make the most of my time in the gym.

Plus, there's no way I'm letting this baby get buried in the bottom of my drawer. My husband and I already made a deal that I couldn't buy any more fitness gear until I've completed enough workouts while wearing it to pay off the cost of the bra. If that's not motivation, I don't know what is.