What the Heck Are Those Purple Spots All Over Michael Phelps?

How the Olympian is using an ancient Chinese technique to help with his athletic performance. 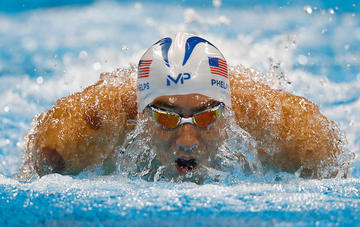 Swimmer Michael Phelps continues his reign as the most decorated Olympian ever with last night's gold medal finish in the relay, putting him at an astounding 23 Olympic medals of his own. Twenty-three. But Phelps' winning streak isn't the only thing people are talking about. As the champion swimmer hugged his teammates to celebrate, the world also noticed some rather strange marks on his shoulders and back. They were too perfectly round to be hickeys, too perfectly spaced to be training bruises, and too swollen to be tattoos. So what the heck were they?

It turns out they're marks from cupping, a type of "energy healing" practiced in traditional Chinese medicine that has roots in other ancient healing arts. Cupping is done by placing little cups strategically over the body. The 1- to 3-inch cups are generally made of glass or plastic, sometimes rubber or ceramic. They're specially designed to induce a vacuum which draws the skin and tissue up inside them, resulting in a circular bruise. In hot cupping, the vacuum is created using a lit cotton ball held briefly underneath the cup before placing it on the skin. Other methods include a hot water bath and a rubber ball that can be squeezed to create suction.

"Cupping can be described as somewhat like a reverse massage," says Lisa Alvarez, co-founder of Healing Foundations. "Instead of pushing the muscles into the body to get them to relax, suction is used to gently pull the muscle tissue upward to help it release."

Even though Alvarez says it's very soothing (many of her clients fall asleep on the table), it's not just for relaxation purposes and may have some specific benefits for athletes. The suction draws new blood to the site, she explains, which increases circulation to help release tight muscles, reduces soreness and inflammation and helps the body recover faster after a tough workout. She adds that it can help improve performance by breaking up old scar tissue and "extracting toxins" that have built up in the body, strengthening the immune system.

"Cupping increases micro profusion or microcirculation at a superficial level in muscles that are tight or stiff," she says. "Increased blood flow to muscles and surrounding tissue brings in oxygenated blood and fluids to carry out metabolic waste and deliver the components that are needed for tissue repair."

While cupping may seem a little "out there," and it has certainly been debated, Phelps has reportedly been a fan for years. And who are we to argue with the guy who has 23 gold medals?