According to new research, you can boost your endurance without even feeling the extra effort—as long as you look at the right thing. That's right—learn how your eyes can override your muscles. 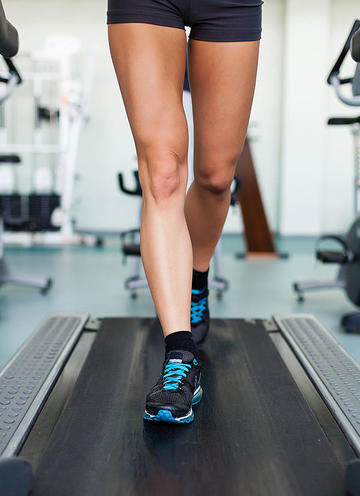 Change the channel and flip the page. It turns out, what you watch and read during your workout can help you sweat it out for six extra minutes or more, according to new research published in Frontiers in Human Neuroscience.

For the study, a team of researchers from the University of Kent and Bangor University, both in the UK, completed two experiments examining how visual cues influence exercise performance. In the first, 13 recreational exercisers looked at either happy or sad faces for about 0.02 seconds as they cycled to exhaustion. In the second, one fit guy cycled 12 different times, half the time he was shown action words (action, go, lively, energy) and the other half, he was shown inaction words (stop, toil, sleep, tired).

Researchers found that the participants who looked at happy faces cycled for 2 minutes and 58 seconds longer than those who looked at sad faces, while the solo cycler peddled for an extra 6 minutes and 39 seconds when he read action, rather than inaction, words. Plus, both happy faces and action words made exercisers feel like they hadn't exercised as hard.

"Both kinds of visual cues help increase exercise duration by reducing your perception of effort," says study author Samuele Marcora, MSc, PhD, director of research at the University of Kent at Medway's School of Sport and Exercise Sciences. "In other words, they 'trick' your brain so that exercise feels easier even when exercising at exactly the same exercise intensity." Marcora's previous research shows that the real limit to how long you exercise is perceived effort, not muscle fatigue.

Marcora is currently exploring ways to incorporate motivational visual cues into exercise machine displays and "smart glasses" that can be worn during exercise. (Um, we can't wait for those to hit gyms!) But for now, reap the rewards of positive visual cues by turning on a comedy or reading a motivational magazine (ahem, FITNESS) to log more treadmill time.