What is the Best Weight Loss Tea? | Fitness Magazine
Skip to main content

Are Weight Loss Teas Really Worth the Hype?

Teas that can help you conquer stress and slim down. Winner, winner. 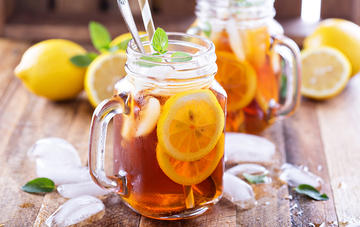 Let's make one thing clear: Restrictive diets suck. Which is why instead of driving yourself crazy trying to stick to one, you can consider sipping a weight loss tea. Some brews can help you stop snacking while others can boost calorie burn. And while we realize that may sound like an opening line for a cheesy weight loss pill advertisement, you can't argue with science. We've scoured the research journals to bring you the best fat-frying brews on store shelves that might be worth a sip.

We like: Twinings, The Republic of Tea, Celestial Seasonings Sleepytime

According to a study published in the journal Nutrition and Metabolism, this brew blocks the formation of new fat cells while simultaneously boosting lipolysis, the body's process of breaking down stored fats. Another group of researchers found that the tea is also a rich source of catechins, a type of antioxidant that triggers the release of fat from the cells and helps speed the liver's ability to turn fat into energy. Speed up your slim down when you alternate sipping cups of white tea and these 5 Best Teas for Weight Loss.

The stem, fruit, and root bark of the barberry shrub contains berberine–a powerful naturally-occurring, fat-frying chemical that Chinese researchers discovered can prevent weight gain and the development of insulin resistance in rats consuming a high-fat diet. Previous studies have also found that consuming the plant can boost energy expenditure, and help decrease the number of receptors on the surface of fat cells, which makes them less apt to absorb incoming sources of fat.

This red, naturally sweet tea made from the leaves of the Rooibos bush is a powerful fat-melter. According to South African researchers, polyphenols and flavonoids found in the plant inhibit adipogenesis—the formation of new fat cells–by as much as 22 percent. The chemicals also help rev fat mebaolism, so it might be smart to sip on if there's some stubborn weight clinging to your middle.

Chinese researchers divided rats into five groups and fed them varying diets over a two month period. In addition to a control group, one group was given a high-fat diet with no tea supplementation, and three groups were fed a high-fat diet with varying doses of pu-erh tea extract. The researchers found that the tea significantly lowered triglyceride concentrations (potentially dangerous fat found in the blood) and belly fat in the high-fat diet groups. Although sipping the tea could have slightly different outcomes in humans, the findings it might be worth your while to fix yourself a steaming mug of the stuff to literally shrink the size of your fat cells. 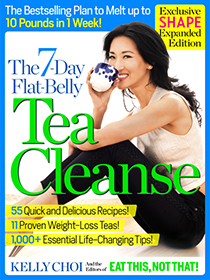 This full list was provided by Kelly Choi, author of The 7-Day Flat Belly Tea Cleanse. Test panelists lost up to 10 pounds in one week.

5 Types of Tea That Help You Lose Weight