Your Workout Is Actually Making You Crave a Doughnut

Apparently we're programmed to reach for a sugary treat post-sweat. 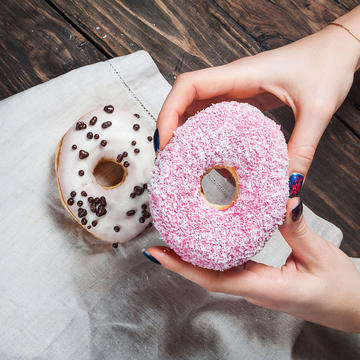 We're big fans of the #treatyoself system. After a long day, sometimes the thought of the ice cream you're going to indulge in afterward is just the motivation you need to get to the gym. It turns out there might be some *real* science behind your desire to reach for a treat post-workout.

When we exercise, we're implicitly more motivated to reach for a dessert than when we don't exercise, according to a new study published in the Journal of Health Psychology. (Related: How You Reward Yourself for Working Out Majorly Affects Your Motivation.)

Researchers recruited 88 college students to perform a test called the "approach avoidance task," used to measure people's automatic reactions to stimuli and allowing the researchers to measure the volunteer's subtle, immediate, unintentional impulses. (Which, unlike say, deciding to reward yourself with ice cream post-workout, are "not influenced by personality differences, goals, or attitudes," the study authors explain.) Students held a joystick while they looked at images of dessert foods—think chocolate cake, ice cream, and brownies—mixed in with images of neutral images like a clock or a lightbulb. Meanwhile, researchers monitored their hand movements. Pulling the joystick toward oneself was associated with more positive feelings about the image than pushing the joystick away.

Next, the volunteers were split into two groups. One group did a 20-minute workout on a stationary bike at moderate intensity, and the other completed a 20-minute computerized memory task. Afterward, both groups again took the same joystick-image test.

The results? Those who had exercised became more attracted to the dessert in the second test compared to the memory test group. The researchers think this may be because of "an evolutionary drive to replenish energy that has been expended." That said, the study didn't include images of healthier food options—like, say, vegetables or fruit—so while it would still make sense that we want to replenish energy, more research needs to be done to see exactly how we want to replenish it.

Of course, using this science as reason to indulge in all the sugary treats sounds wonderful, but we won't get too carried away here: Regularly over-rewarding yourself with a 1,000-calorie treat after a quick workout on the spin bike likely won't help you reach your fitness goals (sadly). But if you're looking for a kick in the butt that doesn't involve calories, try these scientifically proven techniques to boost motivation.