"I Climbed for a Cause"

A misfit with "normal" kids' sports, Paige discovered her skill at rock climbing — and paid it forward. 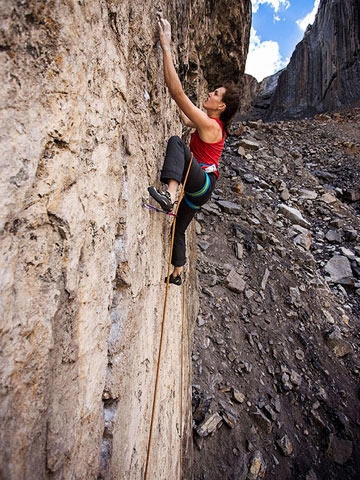 As a kid, Paige Claassen, 24, had trouble finding a hobby she was passionate about. "I sank in the pool, was off-key on the saxophone and couldn't keep track of the soccer ball," she says. But something clicked when she tried rock climbing at 9. "I loved the challenge and saw each climb as a puzzle," she recalls. Paige was a natural; she practiced several times a week and soon started competing. Over the next 10 years, she made history as the first female to summit eight different climbs, taking home gold at the Junior Bouldering Nationals in 2006.

When Paige graduated from college in 2012, she dreamed up a unique way to marry her passion with the skills she had acquired as a marketing major. "I wanted to travel and contribute to the communities I visited," Paige says. "So many people raise funds by running races. Why couldn't I do something similar with climbing?"

She came up with a climbing tour of nine countries to make money for local charities and hooked up with Marmot, the outdoor clothing and gear company, to sponsor the tour. Paige would travel with a videographer and spend about a month in each location, tackling a climb near a community that could use her help, then post a video online. "Our goal was to create episodes with amazing climbs and sprinkle in information about the nonprofits to encourage donations," she says.

Last July, Paige kicked off the Marmot Lead Now Tour in South Africa. She raised money for Room to Read, a nonprofit that builds libraries and classrooms, and was the first person to summit an 80-foot sandstone climb called Digital Warfare. Eight other countries and causes followed; now Paige is touring the U.S. to bring attention to the charities and inspire others to step outside their comfort zones. "I've been so lucky to be able to chase my dreams," she says. "I hope the money I raise allows other women to do the same."