How Getting Fit Changed Every Aspect of My Life

One woman's story on how fitness can be the catalyst to so many other achievements in life. 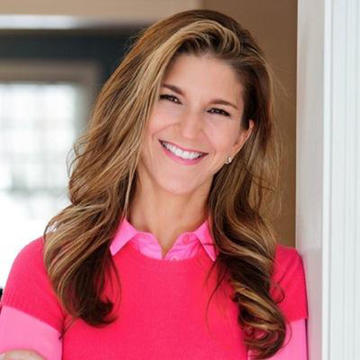 Back in 2011, I wrote a story for Fitness magazine called "Body Proud." In it, I asked six women to choose a body part they were most proud of and discuss why. One of those women was Renata Bregstone—and full disclosure, as she's a friend of mine, I already knew how passionately Renata, a former high school soccer captain, felt about the 4-inch white scar on her knee, left behind from an ACL surgery.

At the photo shoot for the story, Renata met—and immediately bonded with—the five other women: a firefighter with kickass glutes; a violinist with ripped biceps; a ranch manager with abs of steel; a sculpturist with gifted hands; and a triathlete with incredible lats.

"Meeting all these awesome, strong women made me feel inspired and beautiful," says Renata, now 43, an entrepreneur, fitness enthusiast, and mother of two living in Highland Park, IL. "They were all so independent, but even though they were busy like me, they were able to incorporate fitness into their careers and their livelihood."

That struck a major chord with Renata, someone who had spent her youth on the soccer field and tennis court, even walking on to her varsity tennis team in college. While she maintained a healthy size 8 throughout her 20s and early 30s, after giving birth to her daughter in 2006 and her son three years later, she says her body "morphed." "I had rolls on my stomach that I'd never had before," she says. To fight back the weight gain, she would run on the treadmill, but admittedly never pushed herself. "As soon as I felt tired and sweaty, I'd say, 'Okay, 20 minutes, I'm done.' The goals that motivated me to stay fit in high school—strength, power, confidence—had changed. I just wanted to fit into my pre-pregnancy jeans." Plus, she was totally exhausted from her work as owner of an MBA Admissions consulting company.

So when Renata found herself surrounded by those rock-star women at the photo shoot that day, she felt reinvigorated, and they reminded her that being fit is a lifestyle, not just an item to be ticked off her to-do list.

Soon after the article ran in the April 2012 issue of Fitness, Renata began taking classes at Flywheel, and she was drawn to the sense of community it offered. "I like to work hard with other people, and the instructor was like having a coach," she says. "I felt like I was back on a team, working out alongside other people, encouraging one another." And as her body grew stronger, so did her confidence. "I felt like I could be a role model for other women who felt stuck and wanted encouragement. I started to feel like, 'If I can do this, I can do anything.'"

Renata moved on from Flywheel to Shred415, a Chicago-based group interval training class that alternates between hardcore treadmill and strength training. There, she discovered the same women-focused camaraderie she'd experienced in high school sports and felt at Flywheel. It was this same kind of female power she read about in Stiletto Network: Inside the Women's Power Circles That Are Changing the Face of Business. In the book, author Pamela Ryckman, a former investment strategist, challenges women to create all-female networking groups.

For someone like Renata, who had recently moved to the Chicago suburbs and was missing her favorite networking events in the city, this girl-power attitude was the extra push of momentum she needed. "It all came together," she says. "Whether it's team sports, a fitness class, or the business world, women need fist bumping, cheering on. It's all about women connecting with and helping other women."

So in July of 2014, she launched Blazin' Babes, an all-female professional networking organization where women gather in a social setting to share business connections and advice for work-life balance as well as offering opportunities to grow their careers.

All that Renata puts into Blazin' Babes does not take away from the effort she puts into her workouts, and she never forgets just how far she's come. "Before Shred415, I could do 10 push-ups; now I can do 50," she says. Her instructors have shown her that lifting heavy weights will only make her lean and strong, not bulky. She fuels her muscles with loads of veggies and lean protein. (A spinach salad with eggs, avocado, shrimp, and veggies is a staple in her diet.) She keeps her starchy carbs to a minimum but isn't afraid to enjoy some ice cream or splurge on French fries now and then.

Renata's discovery of group fitness has reshaped her circle of friends, too. She's found a community of like-minded people with just the right amount of craziness necessary to wake up at 4 a.m. so they can run on a treadmill before running a business from 9 to 5. They've become her tribe, and not only do they exercise together, they meet for cocktails, celebrate birthdays, and share playdates. The women area also big supporters of Blazin' Babes, attending and even speaking at events.

And when Renata isn't working on her fitness, her business, or her friendships, you'll find her on social media, spreading the positive vibes the rekindled relationship with fitness has given her. "I like posting before my workout because I'm telling the world I'm doing this, so I'd better do it and do it well." But she's also honest about fitness bummers like injuries or post-vacation laziness. "I want people to know [that we all] have good days and bad days...and I want people to recognize the difference between having a 'bad day' versus making excuses."

Overall she hopes her experiences and story are a game changer for other women who feel stuck. "Everything I achieve or overcome on the treadmill empowers me to achieve or overcome a challenge in my everyday life," she says. "It motivated me to start my own company! Plus, I can do squats while holding 30-pound dumbbells in each hand." Okay, I'm officially impressed.