This easy guide will help you melt pounds gradually by changing your lifestyle, not banishing the fun from your life. Find out how to boost your metabolism, beat bloat, and more.
By Mindy Berry 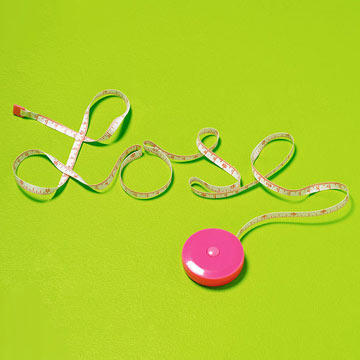 Get 25 percent of your calories from low-fat protein.

Why try it: "Protein will keep you fuller longer," says Susan Bowerman, RD, assistant director of the UCLA Center for Human Nutrition. "When women cut calories, they tend to eat salad." Soon after, you're starving.

Add lean protein to meals and snacks — aim for 90 grams a day and 1,400 calories total. "A lot of women think protein means chicken, meat, or fish," says Elisa Zied, RD, a spokesperson for the American Dietetic Association. But some of the best choices are dairy foods, beans, and nuts.

DROP 10: In about eight weeks with just this one strategy!

Why try it: Most likely there's a high-cal coffee drink, hunk of bread, and piece of cheese in your day.

Cut out these foods:

DROP 10: In about three months.

Consume 300 calories at breakfast and your daily total will be about 100 fewer calories.

Why try it: People who eat a morning bowl of cereal are less likely to become overweight than those who pass up their a.m. meal, studies show. "Breakfast skippers tend to overeat at lunch because they're famished," explains Bowerman. "They're also more likely to snack on high-cal food all day, and justify it by saying, 'I didn't have breakfast.'"

Try a rotation of these three healthy starts, which contain between 200 and 300 calories each.

DROP 10: In about nine weeks, if you combine this tactic with the "Three Change" Way and the "Sleep More" Way.

Break up with the office vending machine. Bring a healthy treat from home instead.

Limit your afternoon nosh to 150 calories. Here's what to eat for a:

DROP 10: In about nine months. But if you combine it with the "Eat Breakfast" Way and the "Three Change" Way, it will take just eight weeks.

Why try it: You won't feel hungry. "Fiber is the indigestible component of whole grains, fruits, nuts, beans, and vegetables," explains Tanya Zuckerbrot, RD, author of The F-Factor Diet. "Because you can't digest the fiber, it will fill you up on its bulk with no calories."

DROP 10: In about eight weeks.

A little bit of portion control can add up to a lot of weight loss.

Why try it: Obese patients given a plate and cereal bowl marked for portion size were almost four times more likely to have lost at least 5 percent of their body weight after six months, a study found.

Leave three generous bites of your breakfast muffin, lunch pizza, and steak dinner on your plate and you'll save between 50 and 75 calories at each meal.

Blast more calories in less time and fire up your metabolism with interval training.

Why try it: "Adding several short bursts of high-intensity exercise to your walking routine can burn up to 100 calories more in the same amount of time," says Geralyn Coopersmith, a senior national manager at Equinox Fitness Training Institute. Doing challenging exercise also boosts your metabolism.

Kick up your workout with this routine from Coopersmith:

DROP 10: In about a year. Combine it with the "Eat More" Way and see results in just seven weeks!

Sometimes feeling 10 pounds lighter is as good as losing it.

Why try it: The foods that make you bloated — refined carbs, such as pizza, pasta, and white bread — have empty calories. "When they get stored in the body they attach to water," says Zuckerbrot. "The more of them you eat, the more water you hold on to."

Trade crackers for fruit and yogurt.

Other tips: Eat a small meal before an important event; a large one can cause bloat. Go easy on the salt: High-sodium foods can make your stomach pooch. And drink lots of water. Your body works more efficiently when hydrated.

The "Eat Your Favorite Foods" Way

When dining out, don't order the "healthy" choice if it's not what you want. Otherwise, you may end up eating more than if you'd just had some of what you craved.

Why try it: Healthy food has calories, but we tend not to count them, experts say. For instance, when people were asked to guess the calories in meals from Subway (often considered to be a healthy takeout option) and McDonald's, they underestimated the number of calories in the food from Subway, according to research from Cornell University. "Bottom line: You can eat what you want, even a cheeseburger, if you keep portions small," says FITNESS advisory board member Dave Grotto, RD, author of 101 Foods That Could Save Your Life.

Restaurant meals are higher in calories than home-cooked ones. Dine out once a week (including takeout) instead of three times.

DROP 10: In about a year — without ever feeling deprived.

People who get fewer than seven hours a night have higher BMIs than those who get enough rest.

Why try it: "It's possible that just by sleeping more, you'll start to lose weight," says Grotto. "While I was writing my book, I stayed up until 2 a.m. each night for months, and I gained 15 pounds. Then after I got back into my sleep routine, the weight started coming off." Grotto believes that there are two reasons for this. First, lack of sleep spikes your levels of cortisol, the stress hormone that signals your system to hold on to fat for survival. Second, a well-rested brain equals more energy for making smart lifestyle choices, such as having soup and salad for lunch instead of chicken fingers. "You'll have fewer cravings for rich, fatty foods when you aren't sleep-deprived," Grotto explains.

Turn off the TV and the computer and go to bed already!

DROP 10: In about a year. Combine it with the "Protein" Way and the "Eat More" Way and you'll lose the weight in just five to seven weeks!