Four women swore off chocolate, sweets, caffeine, and fatty foods for 30 days. Did they freak out? Break out? Lose weight? Read on to find out.
By Debbie Koenig 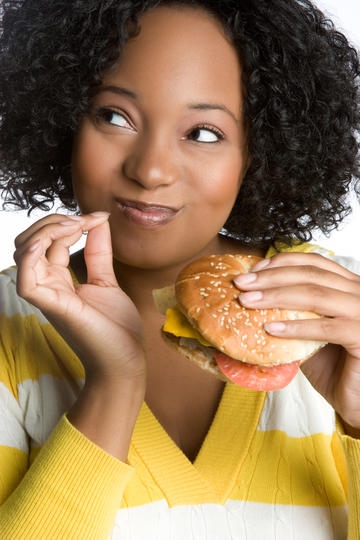 Could you give up chocolate, fat, caffeine, or sweets for one month? These women did — and it wasn't exactly a piece of cake. "Breaking an ingrained habit takes focus and determination, especially when it comes to a favorite food or mildly addictive substance like caffeine," says Dawn Jackson Blatner, RD, a dietitian at Northwestern Memorial Hospital Wellness Institute in Chicago who advised all four for the duration of the plan. But for these women, fear of heart disease, worry about a psychological dependency, or just wanting to lose those last five pounds gave them the push they needed. Here's how they fared (hint: The chocoholic was climbing the walls), plus tips on how you can cut out — or cut back on — each of these things too.

Confessions of a Chocoholic

For Allison, it wasn't the amount of chocolate she ate that concerned her but the intense cravings she got — and the erratic behavior they caused. "I scrounged around my cupboards and car looking for chocolate," she confesses. She ate chocolate every day and felt that no sweet was worth eating unless it contained (you guessed it) chocolate. "I worried that I was too dependent on it, and even though I didn't have all-out binges, I felt anxious about it afterward, like I had a real addiction."

Nightmare. Not surprisingly, Allison struggled the most of the four women. She couldn't find any foods to satisfy her cravings and admits that she thought about going on a chocolate bender daily. "I started eating slice-and-bake oatmeal cookies at night," she says. "I ate more sweets than I did when I was eating chocolate!"

Even worse: Once her 30 days passed, Allison ate brownies every night for a week. According to Blatner, for Allison, full-out deprivation backfired. A better strategy might have been to limit chocolate to every other day instead of banning it entirely.

If, as for Allison, something is an absolute, nonnegotiable, must-have-it-every-day treat, denying yourself can cause bingeing, bingeing, and more bingeing. Allowing room for a beloved food — and practicing portion control — can help you manage intense cravings. For chocolate fiends, Blatner's favorite is CocoaVia's 80-calorie Chocolate Snack Bars. "They're portion-controlled and delicious, plus dark chocolate has heart-healthy antioxidants." If you still feel that a food has too much of a psychological hold, consider the circumstances in which you desire it. For example, if you crave a certain snack after a stressful conversation with your mother, avoid it during those times and save it for when you're more relaxed (take a walk or count backward from 10 to ease the stressful moment). Soon you'll start to associate it with pleasure instead of tension, which can help rein in out-of-control cravings.

Stephanie's caffeine habit consisted of two Grande Starbucks coffees each morning, one or two cups of iced tea or soda at lunch, and more soda in the late afternoon to help her power through her 12-hour workdays. "It helped me focus in the morning and the first part of my day, but I was becoming really jittery and then crashing in the afternoon. I was falling asleep at my desk!" she says.

Stephanie went cold turkey, replacing her usual morning coffee with decaf tea and her soda with water. She had bad headaches every day for the first two weeks, overwhelming fatigue, and a strong desire for a cup. "I was obsessed by the fact that I couldn't have coffee!" she says. She also missed the manic feeling that helped her meet deadlines. But by week three she felt more even-keeled. She added back one cup of coffee at the end of the experiment but kept her intake to that. "I feel edgy and unwell now if I have more than one cup a day," she says. "Plus I can still accomplish everything I need to — including meeting my deadlines — without the crazy caffeine high."

Because caffeine can create a dependency, cold turkey may not be your best option, since it can cause withdrawal symptoms like Stephanie's. "Caffeine is short-acting, so it brings you up quickly, then down just as fast, and you need to drink more and more to get the same effect," explains Blatner. A more effective strategy is to gradually cut back to one or two cups a day by ordering half regular/half decaf. If you do have withdrawal symptoms, which generally subside after a few days, try drinking more water to prevent dehydration (an energy zapper) and eating fiber-rich foods such as fruits, vegetables, beans, and sunflower seeds, all of which take longer to digest and give you more sustained energy. To ease headaches, take a caffeine-free pain reliever like aspirin or ibuprofen.

Elham is from Iran, where having a cup of tea with cake and cookies is a daily social custom. "When you go to someone's home, people offer you tea and something sweet to go with it," she explains. "At school, I drank about six cups of tea a day — and by force of habit ate sweets, too." This meant cookies at breakfast and after lunch and the occasional ice cream at night with friends. "I knew it wasn't healthy, plus I really wanted to lose a few pounds," she says.

For Elham, the biggest struggle was the social aspect of eating sweets. "I went to visit my family in Tehran and cheated a number of times. It's such an ingrained part of our culture I couldn't say no, and it was near impossible to resist my aunt's tiramisu." However, when she returned she followed the advice Blatner gave her and carried two pieces of fruit with her at all times, which calmed her cravings, even during tea breaks. "Once I was back in school and into my busy schedule I didn't miss them as much," she says.

However, Elham did start eating sweets again after 30 days — she says she loves them too much to deprive herself forever — but now feels satisfied with a bite or two of cake or a single cookie. The biggest bonus — and motivator — was the scale. "After one month I lost five pounds, and I'm determined to keep it off!" she says.

As with caffeine, the more sugary foods you eat, the more you crave them, says Blatner. "It's not an addiction in the traditional sense, but sugar supplies your body with a quick burst of energy that's easy to rely on." To start cutting back on sweets, Blatner suggests that you first focus on what you're eating at regular meals. "A substantial breakfast that includes fiber-packed whole grains and some protein will help you stay fuller longer, which tempers cravings," she says. Try whole-grain waffles or reduced-sugar oatmeal with reduced-fat milk or yogurt. For a more savory breakfast, choose an egg-white and low-fat-cheese omelet on whole-wheat toast or a whole-grain English muffin with turkey sausage. If, like Elham, you associate sweets with ritual or reward, find a healthier substitute like fruit or sugar-free hot chocolate and a nonfood reward such as a new lipstick or a pedicure.

Jen dolloped whipped cream in her morning coffee, snacked on packaged cookies and french fries, ate ice cream every night, and prepared home-cooked meals with saturated fats — and lots of 'em. "I live in the South, the only culture in the world that can make green beans fattening!" says Jen. "I love to cook, but I wasn't doing myself any favors with the amount of butter, sour cream, and heavy cream I used, because heart disease runs in my family."

"On the one hand I found it easy," she says. "I replaced the whipped cream in my coffee with fat-free whipping cream and actually preferred the taste." Blatner also gave Jen healthier substitutes for her usual high-saturated-fat ingredients so she could still make her favorite recipes, such as evaporated skim milk in pudding, olive oil instead of butter in her lemon linguine, and fat-free sour cream in her beef Stroganoff. "What amazed me most is that I could barely tell the difference!" she says.

Unfortunately, Jen never did find a suitable substitute for either ice cream or cheese and ended up eating two whole boxes of fat-free cookies in one day. "I replaced one evil with another — lotsa sugar," she admits. "I also missed cheese desperately. I love Brie on crackers, cream cheese on apples. Fat-free cheese is just, well, wrong." After her month was up, Jen continued to use the same healthy fat substitutes but admits that she'd rather eat real cheese and ice cream — in moderation.

If you want to cut back on unhealthy fats, a food label is your best friend, says Blatner. "You don't want more than 10 percent of your daily calories to come from saturated fats, and none from trans fats," she says. In 2006, all products will have "trans fat" listed on the label, but until then, avoid products that have the words hydrogenated and partially hydrogenated oil in the ingredients list.