Control Your Cravings for Good

Some foods really are too good to resist. Here's the scientifically proven way to take control of your cravings, stay slim, and still feel satisfied.
By Virginia Sole-Smith 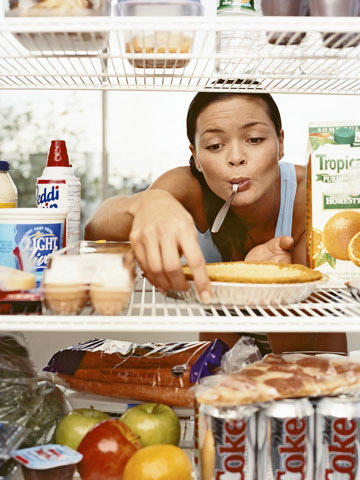 Why We Have Cravings

An entire bag of dark-chocolate chips was devoured in the writing of this story.

I stash them in the fridge. Sometimes I can eat only a handful. But then there are days when I'm on deadline, exhausted, or just in the mood for chocolate — or today, when I'm experiencing all those things simultaneously. That's when the bag sits on my desk while I work. In the time it took me to type the last three sentences, my hand snaked in three times.

It's not just chocolate. At lunch I'll decide to have a few potato chips with my sandwich, and the next thing I know, the bag is empty. In the summer it's usually ice cream, which my husband likes to eat. As I enjoy a spoonful or two — or half the pint — I tell myself that it doesn't count if it's his mint chocolate chip.

I'm not a binge eater. I chow down on these foods only because they taste so darn good. As soon as I see them, I can think of nothing else until I eat them. Then I want more.

It's no wonder I can't stop my cravings: Every time I turn on the TV, drive along the highway, or walk past a vending machine, I'm tempted by sugary, fatty, salty treats. "You're not being weak when you want to eat something that's in front of you," says Susan Roberts, PhD, professor of nutrition and psychiatry at Tufts University in Medford, Massachusetts, and author of The "I" Diet. "Our brains are programmed to tell us to go right ahead."

But why do we crave these foods so intensely? I stepped away from the snacks to get some answers.

How Food and Cravings Affect Your Brain

Our desire for high-calorie treats can be traced to our early ancestors. "When food was scarce, we craved nutrients that we needed to sustain ourselves," explains Nicole Avena, PhD, assistant research professor in the department of psychiatry at the University of Florida College of Medicine in Gainesville. "If you're not sure where your next meal is coming from, it's smart to eat foods that are high in fat and calories, because your body can store the extra fuel. And if you're foraging for berries, the sweet ones are generally safer to eat than the sour ones."

As a result, our brains now reinforce and reward this way of eating. They release powerful chemicals like endorphins, which make us feel pleasure, and dopamine, which can motivate us to keep munching.

But unlike cavewomen, we can walk into any supermarket and find countless varieties of chips and an entire aisle of candy. And we're hardly jonesing for berries anymore. We get the biggest endorphin rush from decadent things, like cookies and french fries, says Ashley Gearhardt, a food addiction researcher at the Rudd Center for Food Policy and Obesity at Yale.

Women are especially vulnerable to cravings. In a study, scientists used PET scans to look at the brain activity of people as they were exposed to the sight, smell, and taste of foods. Women had a harder time ignoring their cravings than men did, and they also expressed a greater initial desire for the foods. "Biologically speaking, food is more important to women than men because women need to eat for two in order to successfully reproduce," says Gene-Jack Wang, MD, the lead study author and senior medical scientist at Brookhaven National Laboratory in Upton, New York. "We evolved to ensure survival by making these urges stronger in women, but it's now a genetic disadvantage."

Research has shown that 90 percent of women can experience food cravings several times a month, compared with only 50 percent of men. Our menstrual cycles seem to play a role. Approximately half of women who regularly crave chocolate will desire it mainly at the start of their period. "If you're used to eating chocolate when you have PMS-related mood swings, those mood swings will become associated with eating chocolate and trigger the desire for it every month," explains Jon May, PhD, professor of psychology at the University of Plymouth in England.

Women are often more likely to deny themselves indulgent foods than men are. It's possible that my husband will leave a portion of pasta on his plate because he knows he can have it anytime he wants. When I decide to splurge, on the other hand, I load up, not knowing when I'll let myself have it again. "Women often fall into a pattern in which they set up unrealistic restrictions, find them impossible to maintain, and then say, Screw it, I'll eat whatever I want," Gearhardt explains.

The Chemistry of Food Cravings

But here's the real shocker: It turns out that giving in to cravings may actually change your brain, according to the latest research. That's because as food has become more processed, the substances we love most — sugar, fat, and salt — have been more potently combined. "Sugar and fat don't come packaged together naturally," Gearhardt points out. Fruit may contain a lot of sugar but no fat, while a steak will give you fat but not much sugar. "In contrast, processed foods offer all three of these ingredients plus caffeine and a variety of chemically engineered flavor enhancers and sweeteners. This amps up your brain's response, leading to cravings."

Not only that, but the sugar, salt, and fat used in processed foods are more intense than their natural equivalents. Highly refined sugar hits the bloodstream faster than the sugar in unrefined whole foods, which means that the resulting endorphin-fueled high is increased and kicks in almost immediately but is difficult to sus­tain, prompting us to eat more. Case in point: A large banana has roughly the same amount of sugar — 17 grams — as a chocolate-glazed doughnut. "You can easily eat a bunch of doughnuts, but you'd never eat your way through a bunch of bananas," Gearhardt says.

Whole foods are also typically a lot more work to eat. Bite into a carrot and you've got to chew it for a while before you can swallow it. But that's not the case with many packaged snacks. In his book The End of Overeating: Taking Control of the Insatiable American Appetite, David A. Kessler, MD, former commissioner of the FDA, reports that processed foods have become so easy to eat that we barely have to chew them now to get them down. And research has shown that we digest unhealthy foods faster because they contain little fiber and protein and a lot of sugar and fat.

Experts say that most of us have a "bliss point," which is typically described as the level of sugar, fat, or salt that gives us maximum pleasure. Foods containing this trio of ingredients seem to stimulate a hot spot in our brains that magnifies the gratification we get from each bite, making us crave them even more. "It's possible for foods to be addictive in much the same way that drugs or alcohol are," Avena says.

Just as a night of drinking gives you a nasty hangover, too much processed food hitting your bliss point can set you up for a sugar, fat, and salt withdrawal. That can create a "second meal effect," leaving us hungrier than usual. "It takes the body two or three days to forget that sugar high," says Ashley Koff, RD, a FITNESS advisory board member and a dietitian for the CW's new reality show, Shedding for the Wedding. "If you eat a slice of cake on Monday, be prepared to keep craving it until Thursday."

How to Conquer Your Cravings

All this can be enough to drive a girl straight to the fridge. But stop! The smart strategies below can help you learn to manage your cravings — and even lose weight in spite of them.

Avoid your triggers. Spend a day taking note of where you are and what you're doing when you experience cravings; then try to change one trigger at a time. "Take a different route to work if it's impossible to drive by the doughnut shop without stopping," suggests Kathy McManus, RD, a FITNESS advisory board member and director of the department of nutrition at Brigham and Women's Hospital in Boston.

Take control. Develop strategies for the triggers you can't avoid. For example, if someone brings cupcakes to a meeting, resolve that you'll split one with a colleague or take just a couple of bites. "Remember, you have the power to make healthy choices," Gearhardt says.

Stick to a schedule. Aim to eat only at set meal and snack times — about every four hours — to help prevent mindless grazing.

Get some satisfaction. If you bring a salad for lunch every day, it's no wonder you're likely to ditch it for pizza. Include indulgences a few times a week, but keep portions reasonable. "Packing a few cookies to satisfy your need for something sweet is a better strategy than depriving yourself until you rebel and eat a huge sundae," says Leslie Bonci, RD, a FITNESS advisory board member and director of sports nutrition at the University of Pittsburgh Schools of the Health Sciences.

Cut back on coffee. "Too much caffeine can lead to a sugar craving, because you'll need a pick-me-up a few hours later," Koff says. Drink no more than two cups of java a day and pair them with protein, like almonds, to keep your energy level steady.

Give your meal a happy ending. Come up with an "enough" signal that lets you know when a meal is over. Nutrition and psychiatry pro­fessor Roberts, for example, likes to finish dinner with a cup of decaf tea: "I enjoy it, and then I know eating is done for the day," she says.

When a Craving Hits...

Wait 10 minutes. "If you still want the food, take a little and then wait another 10 minutes," McManus advises. Ask yourself if it's really going to satisfy you or if you'd rather have, say, a homemade brownie later. "Make sure you're going to get maximum enjoyment from it," she says.

Eat something smarter. When junk food catches your eye, figure out a satisfying nutrient-rich option you can have instead. Nonfat Greek yogurt with some roasted peanuts and a drizzle of honey is a healthy alternative to a Drumstick cone from the ice cream truck.

Have some good with the bad. If you want chips but you're watching your weight, portion out a handful of them with a healthy salsa and some vegetables, Roberts says. "You'll end up eating fewer chips but still feel full."

Don't beat yourself up. "Too often we think, I'm a terrible person for eating that," Bonci notes. "Or we say, Oh well, I already had the chips; I might as well eat the ice cream, too." Associating food with guilt or negative emotions can cause a snowball effect. "Tell yourself, I enjoyed my treat, and now I'm done," Bonci says.

Limit the damage. If you guzzled sugary drinks all day, prevent it from happening in the future by weaning yourself off the sweet stuff. Roberts suggests mixing 90 percent juice or soda with 10 percent water or seltzer for a few days. Then go to an 80:20 ratio and so on, until you hit 10 percent juice, 90 percent water. "Transition gradually and you'll barely notice the change," she says.

Stop the second meal effect. The day after a big splurge, eat a half cup of high-fiber cereal (eight to 10 grams a serving) with your usual breakfast, then again as an afternoon snack and after dinner. "This will help counter your increased hunger by putting a layer of slow-to-digest fiber in your stomach," Roberts says. It's easier to resist cravings when you feel full.