A viral tweet body shamed Simone Biles, Aly Raisman and Madison Kocian for their abs, and people aren't happy about it.

Last week, the Final Five took a well-deserved beach day to celebrate their amazing Olympic success. Simone Biles, the greatest gymnast of all time, shared a picture with teammates Aly Raisman and Madison Kocian on Instagram, giving us a glimpse of their ab-tastical bodies. Seriously, these girls are on fire.

Unfortunately one particular Twitter user was not impressed with what he saw and asked his followers, "y'all find this attractive?" 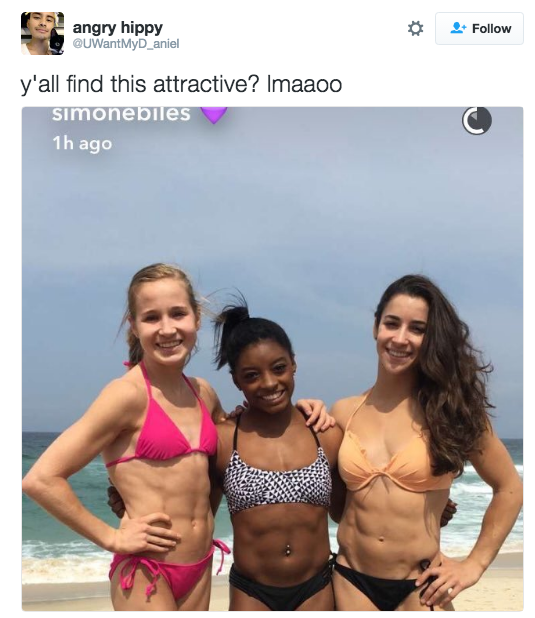 He has since deleted his tweet after hundreds of other Twitter users came to defend their favorite Olympic gymnasts.

@UWantMyD_aniel meanwhile you're struggling to lift weights in the gym

While there's plenty more where that came from, Crystal McDuffy, a student at the University of Florida definitely took gold with her response.

They're the best gymnasts in the world. I promise you, they didn't get those abs to impress your dusty ass. https://t.co/LK05pdB0U8

"When I tweet, aside from gaining a few laughs, my ultimate goal is to get people to reflect on why they do and say the things that they do," McDuffy told Buzzfeed in an interview. "I think this tweet did a swell job."