She Lost Half Her Size by Diet and Exercise Alone

Erica Buteau shares how she meticulously logged changes to her weight and dropped 175 pounds. 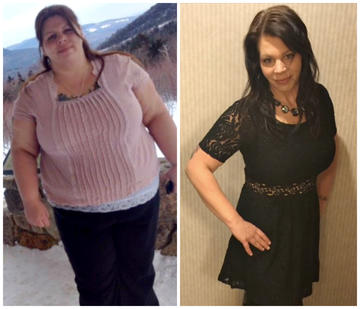 Despite being on two blood pressure medications and pills to control her cholesterol and depression, Erica Buteau wasn't motivated to lose weight. "I had officially stopped caring, and stopped really living," the 36-year-old mom told FITNESS in an exclusive interview. "[I was] making yet another excuse as to why I couldn't join my husband and children on some new adventure or activity."

Things took at turn for the better in 2014, when she got a request from a company asking her to review their digital scale for her recipe and product-review blog. "I can clearly remember the day that review scale arrived," she said. "I carefully unpacked the scale, installed the batteries and stepped on."

After years of not weighing herself, Erica was shocked at the numbers that appeared below her. "I was at the heaviest weight I had ever been, at over 300 pounds," she said. It was in that moment that she realized she needed to take better care of herself.

Her first step towards a healthier lifestyle began with a yoga practice. She began to research ways to change her diet, and settled on the Atkins introductory kit, which provided her with recipes and tips to get her weight loss journey on the right track. But all that aside, she says her biggest motivator was the support she received on her website and social media community, who encouraged her to continue her inspiring journey.

By January 2015, Erica had lost 100 pounds—but she still struggled to see herself as any different than before. "The mirror reflected that depressed 300-pound woman," she said, "while my jean tags told a different story."

It wasn't till she was able to stop taking her blood pressure, cholesterol and anti-depression medications that she truly started to feel her life change. "I proudly stepped on the scale at any doctor's appointment anxious for them to record my progress," she said.

The digital scale that helped Erica kick-off her weight loss journey still receives daily attention. "To this day, I weigh each morning and log the numbers as well as a record of my exercise," she says.

Almost three years since deciding to turn her life around, Erica has lost 175 pounds, and weighs a healthy 145 pounds today. "I've seen the tags on my jeans go from a 24/26 to a 6/8 and even as low as a 4 in some brands," she says. "My friends are always asking for advice and lots of them have jumped on board the low carb lifestyle—and yes, it's a lifestyle from which I will never return to my old ways."