After getting stuck in a turnstile at Disneyland, Jacqueline Adan decided it was time to make a change. 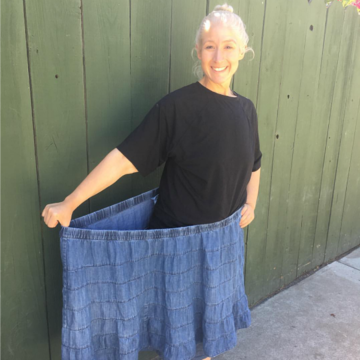 Four years ago, Jacqueline Adan took a trip to Disneyland, hoping to enjoy some rides and have some fun. Unfortunately, the 30-year-old teacher experienced a humiliating moment that changed her life forever.

She got stuck in a turnstile and had to claw herself out to make it to the other side. Though she laughed off the incident to her friends, she later ran to the bathroom and cried.

"I was pretty much mortified," Adan told TODAY after confessing that she couldn't even fit on any of the rides at the theme park. At this point, she knew something had to change which is why the very next day she went to her local Jenny Craig office and stepped on the scale.

It had been four years since Adan had last weighed herself, which is why she was utterly shocked when she saw the numbers. She weighed 510 pounds. "I thought I was going to pass out," she said. "This could not be real life."

After four years of following a strict Jenny Craig diet and working out, Adan has lost 350 pounds and weighs 160 pounds today. To that into perspective, she lost two thirds of her entire body weight. You go, girl!

For the past six months, her weight has remained constant, which has been frustrating. That said, she knows that at the end of the day it's not about the numbers, it's about her emotional and physical well-being.

"I want people to know never give up," she said. "No matter what your dreams or goals are you can achieve them. If you work hard and believe in yourself you can do it."

Visit her Facebook page to follow her weight loss journey and read her entire story on TODAY.com.