The Worst Foods For Runners

What not to eat before, during, and after your next run. 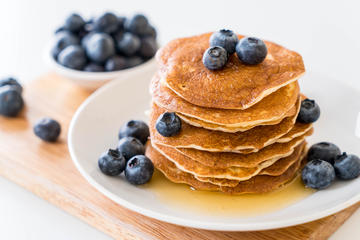 I once ate an ear of corn the night before a half-marathon. I didn't think my dinner decision was too tragic—but my body disagreed. I spent every mile of that race dashing from one porta-potty to the next. Needless to say, I haven't eaten a bite of corn since. (Consider it my ultimate pre-race mistake.)

Every runner is different—and every body is different. I have friends who can eat a big plate of Pad Thai the night before a long run and it's NBD, while others have a strict brown-rice-and-plain-chicken-only routine. As for me? Well, I still avoid corn entirely, and before a run, I'll pass on most leafy, cruciferous greens and salads, which leave me bloated and, well, gassy. I wanted to get some general "eat this, not that" rules when it comes to nutrition and the worst foods for runners, so I enlisted Lauren Slayton, MS, RD, founder of Foodtrainers in NYC (and a marathoner herself) to give me her best advice and running-related food rules.

1. Stick with what works for you.

"I think if you ask any seasoned athlete the worst foods for runners, he or she will have a story," Slayton says. "I was running a very warm marathon and a well-meaning spectator had a plate of orange slices. I was parched, so I reached out and grabbed one little piece of an orange. Let's just say I may as well have been stabbed mid-race. Oranges are forever out for me."

"Unless you want to belch to pass the miles, skip the pre-run seltzer," says Slayton. Since carbonated beverages stay in your system longer than non-fizzy drinks, opting for bubbles before you hit the road may hurt your performance.

"I totally get the urge to splurge after a longer run or race, but the 'I ran, therefore I eat' mentality isn't good for recovery or your weight," Slayton says. "We talk a lot about anti-inflammatory foods—but there are also inflammatory items, like white sugar and flour." (Instead, whip up one of The Best Desserts For Runners.)

4. Pass on the Gatorade.

"When you're in a race, you're kind of trapped because that's likely your only option out on the course," says Slayton. "But try not to use it for your shorter, more routine runs. And yes, I know, I may get slammed for this!" The electrolytes are good, but there are a lot of other—not so good—ingredients to consider in those bottles, too.

5. Avoid too much of anything.

"More isn't necessarily better. In fact, it may be worse," says Slayton. "When runners are ratcheting up their mileage or running at a time of day they usually don't, this comes into play. Too much anything can be problematic from a digestive perspective. So I have a 100 rule: 1 hour before your run, you can eat 100 calories. Two hours before a run, you can take 200 calories."