How to Dominate Your Next Race Despite Scorching Summer Temps

Casually running in the heat is one thing, while racing for a PR is entirely another. Here's how to make it through the miles without feeling like death. 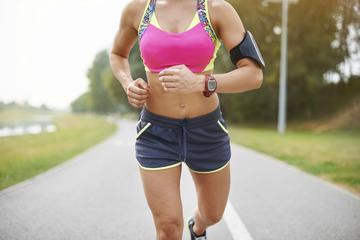 The Ottawa Marathon, scheduled for late May when the average temperate is usually in the 60s, was almost canceled due to unseasonably high temperatures and humidity. The high for the day was 91°F.

It was going to be my second marathon, and I had been training hard with the hope of crossing that finish line in under four hours. But as the date crept closer to race day and heat warnings were issued by the race organizers, I was heartbroken that I couldn't run the perfect race I had worked toward. Still, I couldn't let all that training go to waste. I decided that I would still run strong, even if my goal time was unattainable. (See: 5 Race Goals That Have Nothing to Do with PRs.)

Although I didn't end up breaking four hours, I ran 4:02:44, which was 32 minutes faster than my first marathon. Here's what I did in the days (and hours) leading up to the marathon that helped me achieve success.

It's important to hydrate before any long-distance running event, but it's critical to hydrate well before a hot race. You should be gaining several pounds of water weight in the days leading up to a marathon; your body needs to retain fluids in order to stay adequately hydrated over the course of 26 miles. Drinking a lot of water the night before just isn't enough.

And while you already know to increase your carbohydrates in the three to four days before your race, you also need to increase your salt intake. Your body loses a lot of electrolytes when you're running, especially when it's super hot out. You're more likely to retain the water you need to stay hydrated if you ramp up your salt intake. Eating lots of salty foods (but avoiding fried options) and drinking fluids like sports drinks or coconut water with enhanced electrolytes will set you up for a strong race day.

Lastly, it's important to remember how important hydration is in the middle of your race. Select flavors of gels and chews (Salted Caramel Gu and Margarita Clif Shot Bloks are my favorites) with extra sodium that will help you retain the fluids you drink while running. Take a sip of water at every water stop, even if it's early in the race and you don't think you need it yet. Because once you get dehydrated, it'll be impossible to make up for it while running.

In the later miles, consider alternating your sips between water and a sports drink—most long-distance races offer some, like Gatorade or Nuun on the course. That'll give you an added boost. But it's important to take your gels or chews with water only to avoid digestive issues. So take sports drinks at the water stops when you're not downing fuel as well. Of course, some races (or spectators!) also offer ice pops during hot races. Feel free to grab one if you're feeling it—it usually tastes like heaven on a hot day!

Dealing with the Sun

Arguably the hardest part of running a hot race—in addition to the humidity—is running directly under the sun. Wear a hat or a visor to protect your face and to keep your head cool, and consider wearing sunglasses to keep your eyes protected.

As for clothing, it makes sense to wear as little as possible, and make sure it's made of sweat-wicking material. The Ottawa Marathon was the first race that I ever ran in just a sports bra, and although I was self-conscious at first, I was very glad I did. (See what one woman went through when she decided to workout sans shirt for the first time.) Some companies even have clothing with UV protection built in, which is also great, but shouldn't be substituted for sunscreen. And whatever you do, don't forget to put on lots of skin protectant, like BodyGlide or Vaseline, before the race: On a hot day you might chafe in places you haven't before.

If the temps really start to soar, keeping your hair wet is an easy way to stay cool. Simply take two cups of water at every water stop, and dump one over your head and drink the other. Don't be afraid to take advantage of any sprinklers, hoses, and sponge stations along the course either. Running in just a sports bra helped here too—not only did I stay cooler by not having the extra layer, but I was able to run through sprinklers without being weighed down afterward by a wet shirt.

You're probably going to have to adjust your race goals when dealing with extreme heat. But the sooner you accept that you're going to put forth your best effort with the cards you've been dealt, the better. Many people cling stubbornly to time goals that would be attainable in more temperate conditions, but that are unrealistic and even dangerous in the heat.

It may be best to run by feel rather than by your watch. (See the other benefits one runner discovered after deciding to run "naked.") And while it's always smart to run conservatively in the beginning—working to "negative split," or run faster in the second half than you did in the first to avoid hitting "the wall" too soon—be extra cautious about it when dealing with scorching temps. Since your race likely has an early start time, you might feel great in the cool morning air. But once the sun is up the temperature will quickly rise, and you'll want to have energy stored away that you can tap into when things really heat up.

At the end of the day, remember that it's better to run slowly—and safely—than it is to run faster and not finish or put yourself in danger. You might not be able to meet your original time goal, but you can still conquer the course and have a strong race day!

Gabrielle Kotkov is an RRCA-certified running coach and a two-time marathoner. She blogs at Marathons and Macarons.