It's not about having time—it's about making time. 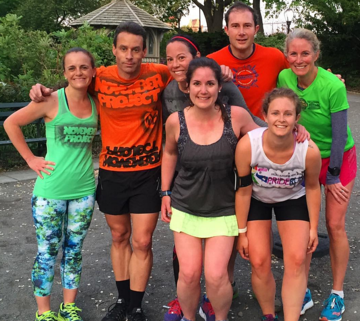 In an OMG, I'm sooooo busy society, it's easy to want to opt for an Orange is the New Black binge over a workout when you finally get some downtime. But even the busiest women—from assistants to CEOs—make time to squeeze in what they can, when they can. Here's how.

I schedule my runs like I schedule my other important appointments in life.
"I block out my calendar when I have to go to the doctor or the dentist," says teacher Laura Ann Walsh, 32. "And I do the same with my runs. In today's busy world, it's not about having time—it's about making time." Twice a week (or more!), Walsh runs at 4:45 am (sometimes earlier!) with a coworker to ensure they get their miles in before hitting the classroom. "Accountability is a huge factor," Walsh says. "I know she's there waiting for me—punctuality is her strong suit—so even when the last thing I want to do is wake up and get out that early, knowing someone is relying on you to be there makes a world of difference."

I enlist people to hold me accountable.
"If I know someone's waiting for me, I'm not going to be late," says Liysa Faye Mendels, 29, who is in grad school and works at a local running store. Enlist a strong network of running friends who run at the same time as you (check out your local running store to find like-minded friends!), and commit to running at a set time every day or week. Can't meet for a run IRL? Agree to text each other to make sure you're up and out when you need to be.

I get to bed early so I can wake up early.
Once the day gets going, life tends to move pretty quickly—making morning workouts optimal for many people. "I hate running after work because I never know how late I'll have to stay at the office," says Caitlin Dilena, 28, who works for CNN. "When I run in the morning, it doesn't matter if I'm going to have to work until 8 pm or if I get invited to a super fun-sounding happy hour—or if I just want to go straight home to the couch. My run has been signed, sealed, and delivered."

I refuse to snooze.
"Morning runs are key during the workweek," says Alexandra Burke, 27, a designer for Ralph Lauren. "If I don't work out in the morning, there's a high chance I won't work out afterward." Ignoring the snooze button and getting up out and the door ensures the run will get done. "Plus, a morning workout gives me a boost of energy to kick some serious butt during the workday," says Burke.

I multitask on the run and embrace the run-commute.
Sometimes, you simply don't have time to unplug and go for a run. In that case? Plug in and still get your run in! "Make running efficient," says Jessica Snider-Rodriguez, 27. "I've gone on running dates, interviews, and even therapy sessions—all while running. When you're finished, you get to check two things off your list!" Even better: Test out the run-commute. Running to or from work is a great way to add miles and a workout to your schedule—and it's usually more fun (and reliable!) than public transportation or sitting in traffic.

Honestly? I make sacrifices sometimes.
"Sometimes choosing to go for a run after work just means you're going to get home really late," says Dana Tsakos, 31, who works in human resources. "If you really want to get that run in, especially if you're training for a big race and those miles are important, you just have to be willing to make sacrifices here and there."