9 Things That Are Bound to Happen On Every Single Run

From hating every step to having to bolt for a bathroom, there are a few guarantees when it comes to running. 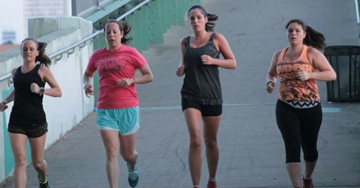 It doesn't matter if you feel great or horrible, if you're prepared or unprepared, or if you're psyched to run or are dreading it. There are some things that are just inevitable, and that occur on every. single. run. Here are nine of them.

"You're bound to hate running during the first mile of every single run," says Boston-based running coach Jana Ross. "You'll question why you're out there and why you even run, and you'll fantasize about all the things you'd rather be doing."

"So you felt a little rusty starting out," says Ross. "That's when a lot of people quit running. But if you can push past that first mile or two, you won't cheat yourself out of the good stuff that comes beyond the infamous wall."

"Inevitably, I will think about food at some point during my run," says Sarah Johnston, a high school teacher from Summit, NJ. "Either I'm hungry, or I just think I'm hungry, so my mind drifts to all things food."

"I will, without fail, pass other runners and panic about whether I should wave," says Los Angeles marathoner Meghan Conroy.

"I'll eventually get the urge to go while I'm on the run," says Madrigal. "Sometimes I don't actually have to go. But when I do? There's rarely a bathroom in sight."

7. Is there something in my shoe?

"During every single run, I find myself constantly reaching for the built-in pocket of my shorts to confirm my keys are still there and haven't fallen out," says Conroy.

"Sure, that first mile felt impossible," says NYC runner Lauren Wolman. "You may start out noticing every little ache and pain, but once that passes and you're warmed up? You're going to feel like you're on top of the world."