6 Reasons to Run at Night

Morning runners may get the sunrises, but night runners get sunsets and starry skies. 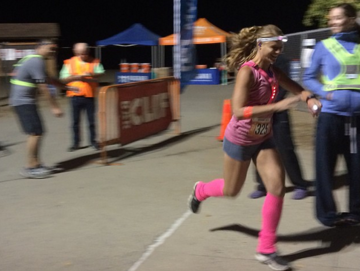 Sure, early birds get the sunrises. But running in the evening is equally awesome. Here are six reasons to become a night runner.

1. It's the best way to unwind after a long day at work.
"Running at night helps me calm down after a long day at work," says Danielle Cemprola, 30, from Greenville, SC. "Many an argument has been avoided simply because instead of going straight home and ranting to anyone who will listen, I decided to lace up my shoes and deal with the issue on the run. My husband prefers that I run at night for obvious reasons."

2. It feels good to move after you've been sitting all day.
"I sit at a desk all day," says Lauren Conkey, 31, from Worcester, MA. "Nothing beats the feeling of stretching my legs and pounding out a few miles of pavement after all that time behind a computer. Plus, any frustrations, stresses, or worries I've worked up over the course of the day seem to disappear a couple miles into a run."

3. The people watching is really good.
"Have you ever noticed that all the dudes run at night?" says Maia Deccan Dickinson, 25, from Anchorage, AK. "I swear, Central Park goes from like 70 percent female in the mornings to 70 percent male at night. And they're hot."

4. You're probably not quite so sleepy.
"You've had an entire day's worth of fuel, so running at night just feels better to me," says Conkey. "In the mornings, I spend the first few miles of my run just trying to wake up. But in the evenings, I'm itching to go, and usually have a better run because of it."

5. Because sunrises aren't necessarily the prettiest part of the day.
Consider running toward a stunning pinkish-orange sunset or underneath a sky full of stars. (Cue Coldplay.) There may be a flurry of early morning #seenonmyrun sunrise photos posted while you were still hitting snooze, but your sunset Instagrams will dominate the evening feed. #nofilter

6. Because it's way better than watching TV.
Sure, spending time with Olivia Pope may get your heart rate up. But what's more satisfying than going for a post-work run, taking a nice, long shower, eating dinner in your robe, and then crawling happily into bed?