5 Reasons to Run a Women's-Only Race

Who run the world? Girls! (Literally.) 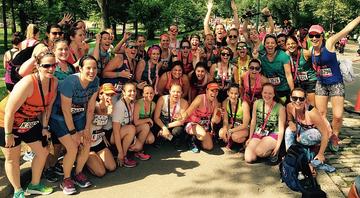 There was a time in history when women simply didn't run. ("Don't run," they said. "Your ovaries will fall out." Um, OK.)

That all started to change in 1967 when Kathrine Switzer became the first woman to officially enter the Boston Marathon. Now, women are truly running the world. In 2015, 57 percent of all road race finishers were female, according to Running USA. (In 1990, that number was just 25 percent.)

And as more women keep lacing up their running shoes, the industry is responding—particularly the road racing industry.

Women's-only races, like the popular Nike Women's Half Marathon series, the New York Road Runners Mini 10K, and the MORE/SHAPE Women's Half-Marathon, cater specifically to female runners. Think a women-run-the-world race isn't for you? Here are five reasons to reconsider. (Before you register, though, here are 6 Questions to Ask Yourself Before Signing Up for a Race.)

1. The camaraderie is incomparable.

There's something special about lining up alongside women of all shapes, sizes, ages, and abilities. It creates an immediate bond. Sure, there's competition at the front of the women's-only race pack, where the leading ladies are vying for prize money and spots on the podium, but no matter your level, pace, or speed, women's-only races tend to feel less intimidating, particularly to first-time racers.

2. There just might be more porta-potties at the start and along the course!

Race organizers are smart, and they tend to know that women, on average, take slightly longer in the pre-race bathrooms than their male counterparts. (It's not our faults—we have to sit or squat!) But more bathrooms means shorter wait times before the race begins. Now if we could only double the number of stalls in women's public restrooms... (Going to the bathroom: just one of the 15 Things Every Runner Should Do on Race Day.)

3. The women's-only race fashion is on point.

Ladies, you know how to put on a darn good show at races. From tutus and crop tops to Dutch braids and flash tattoos, running like a girl never looked so good.

4. If you're normally seeded in a middle- or back-of-the-pack corral, you may find yourself getting a boost.

At larger races when your start time is predetermined based on your predicted pace or finish time, you may find yourself in the middle or toward the back. But without the men messing with the curve, you'll probably get a boost. Corral 7 suddenly becomes Corral 3! (Want to find yourself in Corral 1? Consider working with a coach. Here's What You Should Know About Finding And Working With a Running Coach.)

5. There's something to be said about the power of girl power.

The Spice Girls said it best: girl power! Women's-only races, love 'em or hate 'em, preach empowerment, positivity, and strength, and that's something we can get behind.