5 Race Goals That Have Nothing to Do with PRs

Consider setting one of these race goals next time you find yourself on a start line. 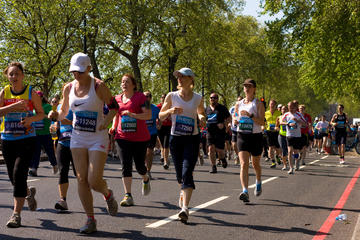 Running fast is awesome, and few things compare to the rush of adrenaline (and exhaustion) you feel when you cross the finish line knowing you crushed your goal and set a new personal record. But if you race often, not every start line will mean it's time to go all-out. Maybe you're just coming back from an injury, or maybe you ran a hard race last weekend and aren't fully recovered. While races are totally a time to push your limits, there are goals you can set for yourself that don't have to do with speed. Here are five to consider. (But first, ask yourself these six questions before signing up.)

It's likely that the biggest thing holding you back during races isn't your legs or lungs—it's your brain! Use races that aren't your goal races as a time to focus on what's happening in your head. Don't let negative thoughts creep into your brain, don't compare your pace to the runner next to you, and don't let yourself get discouraged mid-race if you start to hurt. (These 11 mantras may help.)

2. Go for a negative split.

You've been warned about going out too fast during a race, right? Your adrenaline kicks in when you're lined up at the start, then you gun it and suddenly your first mile (of a 13.1-mile race) was your fastest mile ever. Not ideal. Instead, focus on even pacing throughout the race, or try to negative split, which is running the second half of the race faster than you ran the first half.

3. Impress your spectators with a strong finishing kick and try to pass as many people as possible in the final 400 meters of the race.

Forget the picture-perfect finish line photo where your arms are raised and you're smiling with your ponytail seemingly being blown by a #flawless Beyoncé fan. Instead, run your hardest all the way through the finish line, and try to pass as many runners as possible in the last quarter-mile of the race. Go for "roadkill" goals instead of Instagram-worthy photo goals. (Try these 22 tricks for getting to the finish line faster.)

4. High five or thank a volunteer at every aid station.

Working the sidelines at a race can feel like a thankless job. Show some gratitude as a runner—after all, those water cups would be empty without the volunteers! Don't stop, but make an effort to smile at, thank, or high five as many race volunteers or staff members as possible. (This one is fun, promise.)

5. Nail the art of drinking and fueling on the run.

Ever ran away from a mid-race water station completely drenched—and still totally parched? Yeah, drinking on the run is no easy feat. (You know to pinch the cup to make the water easier to drink, but you still end up giving yourself a water cup shower every single time.) Use non-goal races to work on your race-drinking techniques and to experiment with fueling options for longer distance races. Pass the Gu, please!