26.2 Ways a Marathon Will Change Your Life | Fitness Magazine
Skip to main content

26.2 Ways a Marathon Will Change Your Life

25. Do it because it seems impossible. 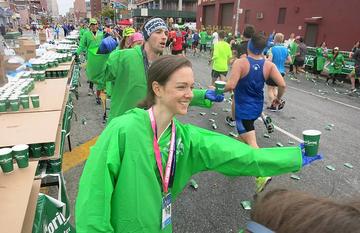 1. "Because it seems absolutely terrifying. There are few things scarier or more intimidating than standing behind the start line of a marathon." —Maia Deccan Dickinson, 25, Anchorage, AK

2. "The marathon is a very long race, and a lot of it is mental. You'll inevitably discover something about yourself over the course of those 26.2 miles that you didn't know before, whether it's the fact that you're stronger and more capable than you ever believed or that you're really super motivated by Justin Bieber." —Lauren Conkey, 31, Worcester, MA

3. "The training will change your life. It will teach you things about yourself, and make you realize you're capable of anything you put your mind to." —Beth Isaac, 38, New York City

4. "It gives you the ultimate sense of accomplishment. And that's not limited to race day. The complete exhaustion after a long run is something I crave." —Liz Heisler, 34, Chicago, IL

5. "Sixteen weeks of long runs = 16 weeks of increased pizza intake, all in the name of carbo-loading." —Conkey

6. Because training for a marathon means lots of long runs—and what better way to explore your neighborhood, your state, and the entire world than by foot?

7. "That post-long-run bacon cheeseburger or steak will never taste so good." —Heisler

8. Don't have time to meet your friends for happy hour? Convince them to join your for part of your weekend long run. Nothing like two hours of catching up on the trails!

9. Just think of all the new running clothes and gear you'll get to buy.

10. "Facing that massive wall at mile 20 and somehow getting yourself to bash through it—despite everything in your body screaming at you to stop—fills you with a sense of empowerment unlike anything you've ever experienced." —Conkey

11. "The screaming fans. Crowd support during a marathon is really special. It's like a big dance party—except you're running, not dancing. Or maybe you're doing both!" — Dani Sturtz, 33, New York City

12. Because there's a race out there for everyone. Whether crowded, big-city races are your jam, or you're more motivated by races with a small-town feel, there are marathons happening every single weekend of the year.

13. Consider the confidence boost you'll get after finishing your first 20-mile run.

14. "Because if you can run 26.2 miles, you can take on the world—or at least deal with whatever crap life throws your way." —Conkey

15. You'll probably get a T-shirt, and maybe even a medal.

17. "The marathon may just be one day, but the discipline that comes from following a training plan over the course of three or four months can add so much structure and accomplishment to your days. I've never been more productive than while marathon training. When you have to fit in hours of running per week on top of all of life's many commitments, you don't have any other choice." —Conkey

18. "After a long run training run, I feel zero guilt about slothing around for the rest of the day." —Heisler

20. Because your doctor says you need more Vitamin D, right?

21. "The post-race celebration: beer, burger, an entire cake. Whatever does it for you, those treats never taste as good as they do after crossing the finish line." —Conkey

23. "It'll teach you that anything is possible." —Isaac

24. "Do it for the insane, inexplicable, undeniable urge to sign up for another one just hours after you limp across the finish line." —Conkey

25. "Do it because it seems impossible. I always thought marathons were impossible. But you build up and train and you make it possible." —Dickinson

26. "It'll change your life. I was going through an abusive marriage and had no self-confidence or hope when I ran my first marathon. Finishing that race during that time showed me that I could do something really, really hard by myself, and that became a metaphor for my life. It proved I was capable of so much more than I thought, and I've carried that knowledge with me ever since." —Danielle Cemprola, 30, Greenville, SC

.2. Because you just might have a ton of fun!