These Cranberry Almond Energy Bites Are the Perfect Fall Snack

Of course they're easy to take on-the-go. 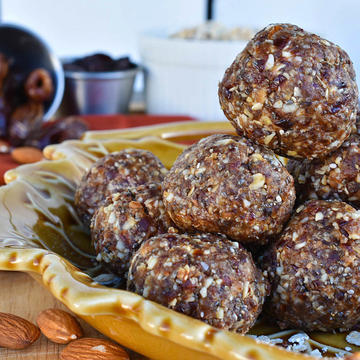 While we adore eating all things pumpkin in the fall (even these recipes from around the world), let's get one thing straight: It's not the only autumnal ingredient that deserves love. Heck, dried cranberry, cinnamon, and vanilla warrant some attention. And they get it with this snack recipe.

Before you jump right into making it, though, get this: these energy bites are filled with antioxidants, fiber, healthy fat, and vitamins—all thanks to one ingredient. Almonds. Of course, there are other ingredients bringing their own nutritional punch, like the aforementioned dried cranberry, cinnamon, and vanilla, along with dates, oats, and chia seeds. It's a super versatile recipe, too. Want extra protein? Toss in a scoop of vanilla protein and a bit of water. Craving chocolate? Mix in mini dark chocolate chips and get your fix.

No matter which way you enjoy it, there are two things to know: these energy bites are super transportable (perfect for, err, everyone who's crazy busy), and they're the perfect fall treat. Whip 'em up and enjoy.