Why your usual store-bought honey might be selling you short. 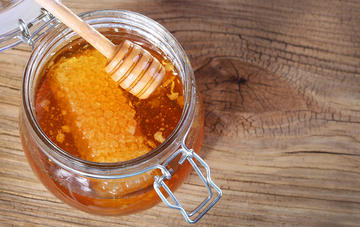 If you're like most people, you probably haven't given much thought to that honey bear bottle you picked up at the supermarket. Sure, it looks cute, but chances are the amber-yellow liquid it contains isn't raw honey. In fact, according to the Food and Drug Administration (FDA), it's probably not even honey at all.

The FDA requires that honey actually have pollen in it in order for it to be classified as honey. But this isn't actually the case with a lot of varieties you'll find at the grocery store. In fact, most honey has had its pollen removed in a purification process that also strips the stuff of the beneficial enzymes, polyphenols, and phytonutrients.

Raw honey has not been pasteurized, heated, or ultra-filtered—all things that occur to most conventional honey products. The biggest downside? Eating the processed version means you're likely missing out on the following health benefits:

Bonus: When you buy raw honey from a local vendor, that means it's coming from local pollen that could help protect you from allergens right in your area.

Other Benefits of Raw Honey

As if nutrition benefits weren't enough, eating raw honey can also help with the following:

Where to Find Raw Local Honey

You can generally get raw local honey at health food stores or from a local beekeeper. While "local" means different things to different people, a general guideline is within your state or less than 100 miles away.