The Kardashians Love Tiger Nuts, But What the Heck Are They?

There's finally a spotlight shining on this superfood. Here's what you need to know. 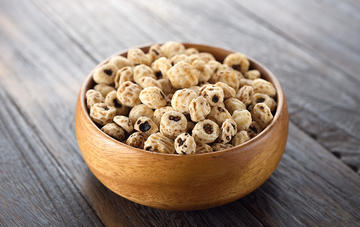 Good-for-you snacks are hard to come by. Usually they're either fried, sugared, or filled with artificial ingredients that you can't even pronounce. But there's a superfood on the snack shelf that's begging for some attention: the tiger nut.

The name itself is a bit misleading, as tiger nuts aren't actually nuts, but rather tiny tubers (aka root vegetables). They have a mild nutty, earthy, and sweet flavor, and a slightly chewy texture. Their appearance is likened to that of a shriveled garbanzo bean, and—bonus!—they're super-filling, low in calories, and chock-full of resistant starch. Tiger nuts have been around for a while, though. In fact, they made up 80 percent of our paleo ancestors' diets (though we don't want to think about the other things in the original paleo diet). They were even found in the tombs of ancient Egyptians.

But if they've been around for so long, why are they all of a sudden getting so much of the spotlight? Well, you can thank the Kardashians—Khloé and Kourtney have been seen munching on them a time or two on Keeping Up With the Kardashians.

Unlike most starches (your usual bread and pasta), the resistant starch found in target nuts act more like a fiber. "Resistant starch passes through the stomach and small intestine without being digested," says Gina Consalvo, R.D. "[It] may even help you lose weight by reducing blood sugar spikes and keeping you full longer than other foods with the same number of calories."

Registered dietitian Ashley Koff also vouches for the veggie. "Tiger nuts are a powerhouse of nutrition," she says. "The resistant starch is a fiber we know as prebiotics, which means that it's actually food for all the good bacteria in your gut to help optimize your digestion."

Koff is also a big fan of the iron content found in these little guys. "Iron is one of those minerals that we all need to get, and I prefer you get it from whole, organic foods," she says. "Tiger nuts provide the equivalent amount of iron [as red meat]. Plus, you can get the same amount of potassium from tiger nut horchata that you would get in foods like avocado and beverages like coconut water."

And of course, there's the basic nutrition label to consider. One ounce of raw tiger nuts contains about 120 calories, 10 grams of fiber (about 40 percent of your daily requirement), loads of magnesium and iron, and 7 grams each of sugar and fat (we're talking oleic acid here, a monounsaturated fat that may promote weight loss and even reduce your appetite).

At the end of the day, it turns out tiger nuts are a solid go-to option when you're looking for a healthy snack. So yes, those Kardashians really were on to something.