Ever wonder if your diet is missing something? Add our expert-approved, eat-right picks to stay lean, healthy, and strong.
From the editors of Fitness 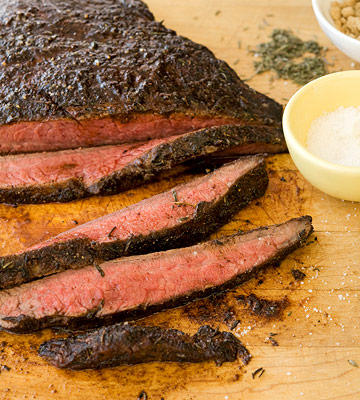 Red meat has a bad rap. The thing is, it really is good for you. Ideally, go for a cut that is both lean and grass-fed. A recent report from the Union of Concerned Scientists shows that meat from grass-fed cows usually has more conjugated linoleic acid (which has been shown in animal studies to combat cancer) and heart-healthy omega-3 fatty acids than the grain-fed variety. Plus, meat from grass-fed cows is lower in total fat and calories. As long as your serving is a lean cut, such as tenderloin, feel free to make this smart choice two or three times a week, says Jonny Bowden, PhD, author of The 150 Healthiest Foods on Earth.

Shopping shortcut: "Look for meat that is clearly labeled 100 percent grass-fed," Bowden says. ("Organic" doesn't guarantee the cows didn't have grain.) If your supermarket doesn't carry it, you can shop online at localharvest.org. Be sure to order cuts that have round or loin in the name, like top round or sirloin; these usually contain about 8 grams of fat per 3-ounce serving.

Make it even healthier: Treat your meat to a homemade rosemary and thyme rub. Studies have shown that cooking beef over high heat can spur the production of certain carcinogenic compounds, but this herb combo can cut the carcinogens by 87 percent.

Bonus benefits: Beef is a great source of protein, iron (a mineral that one in five women are deficient in), and heart-healthy B vitamins.

Curry may very well be the spice of life: Curcumin, the antioxidant that gives the condiment its color, has been shown to halt tumor growth and destroy cancer cells in lab tests. "Our research revealed that this ingredient may help prevent a variety of diseases, including multiple myeloma, lymphoma, and breast, ovarian, and pancreatic cancers," says Bharat Aggarwal, PhD, a professor of cancer medicine at the University of Texas M.D. Anderson Cancer Center. At this point, it's still unclear exactly how much curry you should eat to help avoid disease, Aggarwal says. Experts simply recommend using the spice liberally to reap the rewards. For recipes, check out the book 5 Spices, 50 Dishes, by Ruta Kahate.

Shopping shortcut: For the most bang for your buck, opt for pure turmeric powder rather than curry powder. Turmeric is curry's main ingredient and contains a higher concentration of good-for-you curcumin, according to a report in the journal Nutrition and Cancer. Most grocery stores sell it.

Make it even healthier: Sprinkle curry or turmeric powder over cauliflower or any member of the cabbage family. The curcumin-veggie pairing significantly increases the spice's cancer-fighting ability, found Rutgers University scientists. The research was on prostate cancer, but experts are optimistic about curcumin's ability to combat colon and breast cancers as well.

Bonus benefits: The antioxidants found in curry may also help break up plaques in the brain that cause Alzheimer's disease, say UCLA scientists.

Pistachios are the new health nut. Why is that? New research from the University of Toronto shows that they may reduce the risk of diabetes by decreasing the effect of carbs on blood sugar levels. "Pistachios are high in protein, fiber, and healthy monounsaturated fat," explains study author Cyril Kendall, PhD, "all of which contribute to the slowing of carbohydrate absorption in the body."

Shopping shortcut: Buy salt-free nuts that are still in the shell. "You're less likely to overeat when you have to work for your snack," says Kathy McManus, RD, a FITNESS advisory board member and director of the department of nutrition at Brigham and Women's Hospital in Boston.

Make it even healthier: To sidestep calorie overload, don't just add pistachios to your diet; swap them for an unhealthy high-fat snack, such as chips or cheese and crackers.

Bonus benefits: Other recent research has shown that eating 2 to 3 ounces of pistachios a day can help significantly raise your level of good cholesterol (HDL). Pistachios are full of vitamin B6 and copper, too, which help increase energy.

Rejoice! Your morning cup of joe is healthy. Experts on an American Society for Nutrition panel recently concluded that drinking three to five 8-ounce cups a day lowers your risk of type 2 diabetes, Parkinson's disease, Alzheimer's, and colon and liver cancers. "Among other things, the antioxidants in coffee protect your cells and DNA from damage," Bowden says. "Coffee seems to increase antioxidants in the blood, too."

Shopping shortcut: Go easy on the Starbucks: One 16-ounce grande counts as two servings. Make it even healthier: Too much caffeine can wreak havoc on your sleep, so opt for decaf. It's still loaded with antioxidants.

One of the easiest ways to significantly lower your cholesterol is to eat whole-grain oatmeal daily, reports a British review of 10 studies. The fiber in oatmeal forms a gel that slows down your body's absorption of cholesterol.

Make it even healthier: Satisfy your sweet tooth by topping the oatmeal with a handful of antioxidant-heavy blueberries.

Bonus benefits: "People who eat oatmeal for breakfast tend to stay full all morning and consume less at lunch, due in part to the protein and fiber," says Dave Grotto, RD, a nutritionist in Chicago and a spokesperson for the American Dietetic Association.

"Shrimp is about 90 calories per 3-ounce serving, it has virtually no fat, and it's packed with protein, making it the ultimate diet food," says Ellie Krieger, RD, host of the Food Network's Healthy Appetite with Ellie Krieger. It may even help prevent heart disease, thanks to astaxanthin, the antioxidant that gives the shellfish its red tint. "People shy away from shrimp because it's high in cholesterol, but cholesterol in food is much less likely to raise your blood cholesterol than, say, trans fat," McManus says. Moreover, eating about 1 cup of shrimp daily can raise your good cholesterol level, found a Rockefeller University study.

Shopping shortcut: Buy frozen. "It's often fresher than the stuff you find at the local fish store," Krieger says.

Make it even healthier: "Rinse with water before you eat to remove about 40 percent of the sodium," Krieger advises.

Don't let brussels sprouts' signature scent turn you off. "The smell is a compound called allyl isothiocyanate that causes precancerous cells to self-destruct," Bowden says. "It's entirely possible that eating them every few weeks could help greatly reduce the incidence of colon cancer."

Shopping shortcut: Buy the locally grown variety that are still on the stalk. If you can't find them, go frozen — they're the next freshest thing.

Make it even healthier: Don't boil them! It'll reduce the anticancer properties by 58 percent, say University of Essex researchers. Instead, drizzle one tablespoon of olive oil over two cups of sprouts, season with curry (see "The 'It' Spice"), and roast about six minutes until the outsides are crispy and caramelized.

Bonus benefits: These mini-cabbages are packed with fiber and immune-boosting vitamins C and A.

Enjoying a small amount of flavonoid-filled dark chocolate may prevent clogged arteries and reduce your risk of developing heart disease. Also, eating up to 3.6 ounces daily can be as effective as beta-blockers and ACE inhibitors at lowering blood pressure, notes a recent Archives of Internal Medicine study.

Shopping shortcut: "Look for dark chocolate that has at least 60 percent cocoa, such as Dove Dark," McManus says.

Take two tart cherries and call me in the morning. While your doc may not say that yet, she might soon: A new animal study from University of Michigan shows that consuming a powdered version of tart cherries can lower cholesterol and blood sugar levels, as well as decrease the body's ability to store fat in the liver. It's not yet known if cherry-rich diets will have a similar effect on people, but University of Michigan researchers are hopeful.

Shopping shortcut: Tart and sour cherries are the same thing; they come dried, frozen, canned, or in juice form.

Make it even healthier: Sprinkle the dried variety on cereal or salad, or use cherry juice to oomph up your a.m. smoothie.

Red tomatoes are full of lycopene, a substance that helps lower your risk of cancer, heart disease, and macular degeneration. But orange tomatoes offer two and a half times more. Apparently, they contain a form that the body can more easily absorb.

Shopping shortcut: The tomatoes used in the study were lab-grown, but researchers say that eating orange- or gold-colored heirloom tomatoes will offer similar benefits.

Make it even healthier: Lycopene is fat-soluble, so you'll absorb more by pairing tomatoes with a healthy fat like olive oil.

Bonus benefits: One cup of orange tomatoes provides 338 percent of the RDA for vitamin A.