It turns out you may not want to follow the true "caveman diet" after all... 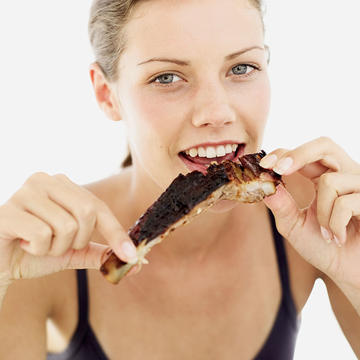 The "caveman" diet—aka paleo—has been a mainstay ever since celebs and CrossFitters alike began singing its praises back in 2008. The sustainability-minded program says no-no to ingredients like whole grains, dairy, legumes, refined sugar, and alcohol, and is all about eating the real, living foods that our ancestors ate. And it turns out that for our caveman ancestors, that entailed real, living humans.

Yep, the original caveman diet included cannibalism, according to a new study published in Scientific Reports. The "unambiguous evidence" comes from the "third cave" at Goyet in Belgium, where researchers found remains dating as far back as 45,500 years ago.

After identifying 283 human remains, including 96 bone specimens, the researchers reported that Neanderthal bones exhibited evidence of "skinning, filleting, disarticulation, and marrow extraction." Yikes. As with the horse and reindeer bones, it seems the femurs and tibias were the most popular, thanks to their high level of nutritional content from the meat and marrow.

Research has unveiled that the modern-day "caveman diet" might not actually be all that closely tied to what our hunter-gatherer ancestors ate thousands of years ago anyway. So we're not too concerned about this "original paleo diet" finding having any real consequences. It's certainly a fascinating (albeit mortifying) new piece of research, though.

Want to give the current paleo diet a whirl? Try these delicious (non-human) paleo breakfast, dinner, and dessert recipes.