The Truth About Saturated Fats

For years you've been told that the saturated fat you eat is public enemy No. 1 in the battle against obesity and heart disease. Turns out, it may actually be — gasp! — good for you. 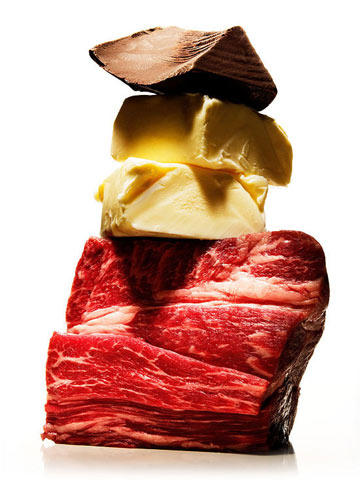 I was a card-carrying skinny-latte-drinking low-fat girl. I ordered frozen yogurt instead of ice cream, grilled chicken instead of steak, and I snacked on low-fat cheese and reduced-fat crackers. With a family history of high cholesterol (my own number hovered slightly beyond the healthy range), I figured that limiting saturated fat was smart.

But in the past couple of years I've made some changes. Inspired by the movement to eat locally, I started shopping at my farmers' market: I bought a quarter of a grass-fed cow and stocked my basement freezer with the beef, which I ate once a week. I also splurged on local bacon sometimes. When my store was out of skim milk, I discovered I preferred creamier 1 percent. I began eating dark chocolate daily. At the same time, I bought fewer packaged crackers, granola bars, and other snacks.

At a recent checkup, I was shocked: Even though I was eating foods rich in saturated fat and a seemingly more indulgent diet, my total cholesterol was down 10 points, my "bad" LDL cholesterol was stellar, and my "good" HDL was the highest it's ever been. And bonus: I hadn't gained any weight! How was that possible? Actually, the health benefits I experienced may be surprisingly common, a growing number of experts say.

Since the epic fail of the fat-free craze of the '80s and '90s, we've learned a lot. The hope was that by cutting fat from our diets, we would trim inches from our figures. Instead, the exact opposite happened: Because fat-free cookies, cheese, chips, and crackers were missing the critical fat that makes us feel full, we ate double — sometimes triple — the usual portion. And because manufacturers dumped extra sugar into these foods to make them taste better, we took in just as many calories and often many more. "The low-fat message backfired," says Frank Hu, MD, PhD, a professor of nutrition and epidemiology at the Harvard School of Public Health. "It led to a proliferation of products that were loaded with sugar, refined carbohydrates, and calories."

These days, advice about fat has shifted away from "Eat less fat" to "Eat the right fats." Fats are now labeled "good" and "bad." The good guys are unsaturated fats: monounsaturateds (MUFAs), found in foods like olive oil and avocados, and polyunsaturateds (PUFAs), found in sunflower and corn oils, among others, and in the omega-3s in salmon and walnuts. Both types earned gold stars because they've been shown to lower blood cholesterol and the risk for heart disease.

The villain, we've long been told, is saturated fat. The conventional wisdom, which dates to the 1950s, is that saturated fat, which is present in meat, dairy, and some plant products, increases our total cholesterol and chance for heart disease and stroke. Trans fat, a relative newcomer that dominated packaged goods and fast food, is another bad guy: It not only ups our LDL cholesterol but also lowers our HDL cholesterol (the kind that helps sweep bad cholesterol out of the body). The American Heart Association recommends limiting your intake of saturated fat to less than 7 percent of your total calories (if you eat 2,000 calories a day, that's 16 grams, roughly the amount in a chocolate milk shake) and of trans fats to no more than two grams a day.

After decades of bashing saturated fat, the medical community was stunned by a 2010 study in the American Journal of Clinical Nutrition. In a research analysis, scientists discovered that there wasn't enough proof to link saturated fat to either heart disease or stroke. It wasn't the first time this fat had been vindicated: Four years earlier the Women's Health Initiative study found that eating less saturated fat didn't result in lower rates of heart disease or stroke. The 2010 analysis, however, was so big and so thorough — involving 21 studies and nearly 350,000 people — that it grabbed experts' attention. "Everyone had just assumed that the evidence against saturated fat was strong," says study author Ronald Krauss, MD, a professor of nutritional sciences at the University of California, Berkeley, who was surprised by the finding and the controversy it created. "We had to work hard to get our study published. There was an intrinsic mistrust of this kind of result."

Researchers say there were even earlier clues that saturated fat didn't deserve its reputation as top dietary villain. The decades-old "diet-heart hypothesis" — the idea that saturated fat is bad for the heart — was mostly based on animal studies and short-term trials that looked only at people's cholesterol levels, not at whether they actually had heart attacks. "Those studies are great for making hypotheses but not for making widespread recommendations," says Dariush Mozaffarian, MD, an associate professor of medicine and epidemiology at Harvard Medical School and a researcher of diet and heart health. "When we started getting evidence from longer trials and observations, we realized that the truth is more nuanced than we thought."

What researchers discovered was that cutting out saturated fat didn't make much difference, until you considered what people ate in place of it. Swapping animal fats for vegetable oils — for instance, using soybean oil instead of butter — appeared to lower LDL cholesterol levels and disease risk. But trading your a.m. bacon for a bagel didn't do the trick. "When you replace saturated fats with refined carbs, your triglycerides can go up and your good HDL cholesterol can go down," explains Alice H. Lichtenstein, the director of the Cardiovascular Nutrition Laboratory at Tufts University. High triglycerides and low HDL are risk factors for cardiovascular disease and criteria of metabolic syndrome, a cluster of health problems linked to diabetes and heart disease.

Eating less saturated fat doesn't seem to help your weight, either. A study in The New England Journal of Medicine found that people on a low-carb diet shed pounds faster and had better cholesterol levels than those on a low-fat diet, even though the low-carb group was taking in relatively more saturated fat. This may be because people eating fewer carbs release less insulin, which may reduce fat storage, control hunger, and influence metabolism in a way that helps keep cholesterol in check.

The Different Kinds of Fat

So why, despite the explosion of positive study findings, is saturated fat still considered evil? One major factor: It's not a single fat. There are more than two dozen kinds, and "they're not created equal," says David Katz, MD, director of Yale University's Prevention Research Center. So it's difficult to make a general recommendation about saturated fats as a whole. Yet that's exactly what the Dietary Guidelines for Americans do. Here are the four major types of saturated fats in our diet, according to the Dietary Guidelines Advisory Committee:

(1) Palmitic and (2) myristic acids
At first glance, palmitic acid (found in palm oil, butter, and eggs) and myristic acid (found in cheese, milk, butter, and beef) fit the bad-guy profile. They appear to increase inflammation and LDL cholesterol. But here's where things gets tricky: The rise in LDL is at least partly due to an increase in the size of each LDL particle in the body, which may not be as dangerous as an increase in the number of particles. These saturated fats also raise HDL in the process, so the net effect may be neutral, not bad.

(4) Lauric acid
There's some indication that lauric acid may not be harmful either. It's found in coconut oil, the latest superfood, which has been touted to do everything from lower stress to whittle your waist. But those claims are overblown. "Lauric acid is probably an innocuous fat," Dr. Katz says. "But no studies indicate that coconut has any edge over other oils that we know confer a benefit, like olive oil."

Some researchers believe that saturated fat may simply be a convenient scapegoat for the true problem with our diets: the food we eat. The top three sources of saturated fat for Americans are cheese, pizza, and such grain-based desserts as cookies and cakes. The foods that saturated fat is found in might actually contribute to the risk to your health. Case in point: Two slices of pizza with meat toppings at a popular chain not only pack 20 grams of saturated fat but also nearly 1,000 calories, more than a day's supply of sodium and a gram of trans fat. In a recent study that linked red meat to a higher rate of death, processed meat, which is high in sodium and other preservatives, was found to be especially dangerous. "We should stop focusing on just one chemical in food and instead look at the overall package it comes in," Dr. Krauss explains.

Modern diets are a veritable perfect storm of unhealthiness, according to Dr. Mozaffarian. He and his colleagues analyzed the number of deaths from various risk factors and singled out five dietary patterns to study: high in trans fat, high in saturated fat, high in sodium, low in fruits and vegetables, and low in omega-3 fatty acids from fish (all pretty darn common in our superprocessed society). When they looked at deaths associated with each pattern, diets high in saturated fat came in, well, dead last. "If you eat a lot of salt and trans fats and few fruits, vegetables and fish, you're at a high risk for heart disease no matter what your saturated fat intake is," Dr. Mozaffarian says. "Conversely, higher or lower saturated fat will have a small effect if you're doing everything else right."

Bottom line: Saturated fat doesn't deserve its bad-guy reputation. That's why shifting the focus to more pressing dietary problems — for example, too many refined carbs or a dearth of produce — is critical, experts say. Read on for eight easy ways to do just that. And pass the dark chocolate, please.

8 Rules to Eat By

So saturated fat is not the evil you thought. But what does that mean for your diet? These eight must-dos cut through the confusion.

1. Load up on whole foods.
If you eat mostly heart-healthy, nutrient-rich produce, whole grains, nuts, beans, and fish, then saturated fat shouldn't be a problem.

2. Don't overdo it.
Saturated fat may not be a culprit, but it doesn't offer the same health benefits as unsaturated fat. So don't start cooking with butter or eating more meat. Fish, beans, and lentils are still healthier protein sources than red meat.

3. Choose low-fat dairy.
Low-fat milk and yogurt are good choices because they have fewer calories and just as much calcium and vitamin D as full-fat versions.

4. Beware of health halos.
Local organic cream from the farmers' market is still cream, and it packs loads of calories. Foods like ice cream and bacon should be considered splurges. And a product labeled "No saturated fat" may be full of sodium, sugar, and refined flour.

5. Don't go loco for coconut.
Choose liquid vegetable oils, such as canola and olive, that are a mix of MUFAs and PUFAs. Though some people are switching to coconut oil, there's no evidence that it's as beneficial as these oils are.

6. Steer clear of trans fats.
They're very bad for you, and they mostly appear in processed foods. Avoid anything that has "partially hydrogenated oils," a code name for trans fats, in the ingredients list.

7. Consider your carbs.
Get most of your carbo­hydrates from fruits, vegetables, and whole grains, not from sugary and refined starches, like crackers and desserts.

8. Treat yourself to dark chocolate.
Indulge in a small piece — about one ounce — every day. The saturated fat in it won't harm your health, and the chocolate packs flavonoids that act as antioxidants, protecting cells from damage.