With as many as 30 percent of Americans claiming they follow a gluten-free or reduced-gluten diet, according to the Center for Celiac Disease Research & Treatment, it seems g-free eating is more than a fad. While eliminating gluten is essential for the 1 percent of folks who have celiac disease, why are so many others nixing the protein found in wheat, barley, and rye? 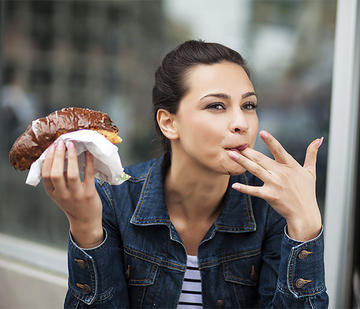 You've probably heard about the reported gluten-free diet benefits. Or perhaps you've eliminated gluten yourself and noted improvements such as better sleep, a flatter tummy, clearer skin, a sharper mind, and more energy. But are the benefits you experience actually due to the absence of gluten, or is it because of something else?

According to Rebecca Scritchfield, RD, a dietitian based in Washington, there are so many factors at play when you make a major diet overhaul that it's nearly impossible to identify a single reason why you might notice some changes in how you look and feel. "When you take out gluten, you're changing so much about how you eat," she says. With gluten off the table, you're probably eating more fruits, vegetables, and protein, for example. "These foods contain more vitamins and minerals that make you look and feel better compared to processed foods that are high in refined sugars, carbohydrates, and fat," Scritchfield says. So the improvements you experience may simply be due to eating a cleaner diet based on whole foods, rather than the absence of gluten.

Another factor that may play a role when going g-free? The placebo effect. The same phenomenon that can make a sugar pill lower your blood pressure—if you believe it will—may be at play when you shift how you eat. Changing your diet takes a lot of effort, so you want to believe that it's worth it. "If you've heard that eliminating gluten has certain benefits such as clearer skin, then you may expect to get those benefits and your mind may start noticing them," Scritchfield says. "You're simply more aware."

For certain people, however, the gluten-free diet benefits may be very real due to an underlying medical condition you may not know you have. First, there's celiac: It's estimated that 83 percent of Americans who have celiac disease are undiagnosed. And although it's rare, you could have a wheat allergy. So if you're no longer eating wheat-containing foods, you may feel better. And for people with IBS or IBD, you may notice digestive benefits when going gluten-free—but that's likely due to the fact that you're incidentally cutting out certain food groups that are known to aggravate the conditions, such as fructans found in wheat. If you think you may have a GI disorder, make an appointment with a gastroenterologist and discuss following a low-FODMAP (fermentable oligo-di-monosaccharides and polyols) diet, which reduces certain types of carbohydrates known to irritate the digestive system, Scritchfield says. (Read more about FODMAPs in 5 Nutrition Myths Disguised as Healthy-Eating Tips.)

If you're otherwise healthy and have adopted a gluten-free way of eating, Scritchfield says there's nothing inherently wrong with that. "You can live a healthy life, eat a variety of foods, and be gluten-free." However, there are certain pitfalls that can occur by following such a stringent way of eating if it's not medically necessary for you. "It's important to get really clear about why you're doing it," she says. For example, if you've removed gluten to lose weight, there are healthier, more balanced paths you can take. "Removing gluten in no way assists weight loss since many gluten-free foods can have just as many or more calories as those that contain gluten," Scritchfield says. "If you've removed gluten and are losing weight it's probably because you've improved your overall diet quality and reduced the number of calories you're eating."

Scritchfield also warns that a drastic dietary change could indicate an underlying eating disorder. If eliminating gluten is causing you to not go out to eat with friends or you obsess about it when you do, then that may be a red flag that you should seek help from a dietitian or therapist, she says. Finally, if you find yourself going overboard on gluten-free packaged foods or overeating foods that contain gluten when you allow yourself to have it (helloooo, holiday cookie trays!) that's also a sign that the gluten-free approach may be affecting your ability to eat a healthy, well-balanced diet. "Deprivation leads to increased cravings and the likelihood of overeating, so cutting out gluten when you don't need to may ultimately backfire," Scritchfield says.

The bottom line is that unless you have celiac disease or another condition that makes you sensitive to wheat ingredients, the benefits you experience when going gluten-free are likely due to multiple factors and not necessarily the lack of gluten. "If cutting out gluten has helped you to improve your diet, that's great," Scritchfield says. "But you may not need to cut out gluten forever." You can reintroduce it through healthy-portioned servings of foods such as whole-grain bread, crackers, and pasta and see how you feel. You may just find that the benefits remain while your desire to inhale an entire pizza and a package of peppermint Oreos diminish.