Drink to Your Health: The Heart-Healthy Benefits of Wine

Red wine: The drink of choice for gourmets and connoisseurs, pretentious poseurs, and, lately, the health-conscious set. White and sparkling wines have started to seem like the ugly stepsisters of their scarlet sibling, but we're here to tell you that they, too, have their health benefits. 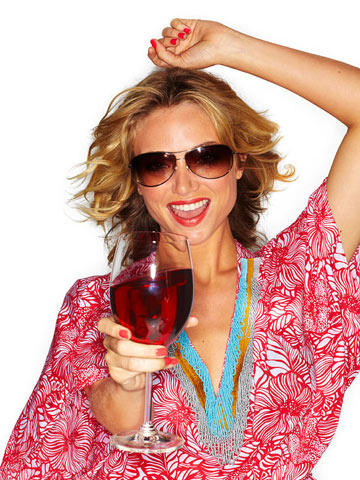 When making wine, "you're basically converting sugar to alcohol," says Rodney Schatz, a third-generation grape farmer and chairman of the California Association of Winegrape Growers. To make red wine, red grapes are harvested at a certain Brix level, which indicates the percentage of sugar in the grape. Grapes are then crushed and left to ferment in a tank with added yeasts. To extract the desired tannins, colors, and flavors, temperature is controlled and the speed of fermentation is manipulated as juice is pumped over the skins.

Red vs. White vs. Sparkling

Red wine naturally contains phytochemicals. Two types of polyphenols — catechins and resveratrol, found in the skin and seeds of grapes — are thought to give red wine its antioxidant heart-healthy properties. The antioxidants in wine, called flavonoids, also reduce the risk of coronary heart disease by reducing bad LDL cholesterol, boosting good HDL cholesterol, and reducing blood clotting. One study even suggests that resveratrol may inhibit tumor growth for some cancers.

So how do all the different wines stack up against each other? "Red has more antioxidants than white, rose has similar to red, and there's not really any antioxidants in Champagne," says Lisa Young, adjunct professor of nutrition at New York University and author of The Portion Teller Plan. Since polyphenol level is rooted in the grape skin, red wine holds superior to lighter-tinted wines — though white wine does have some cardio-protective benefits. But while their antioxidant count is diminished, white wines retain the ability to reduce bad LDL cholesterol.

Before you think wine's antioxidant properties are reason enough to toast every celebration, know this: In September of 2007, U.S. researchers announced that an average of three or more drinks a day — be it wine, beer, or hard alcohol — can raise a woman's risk of breast cancer as much as smoking a pack of cigarettes. Ethyl alcohol, present in all booze, is the suspected culprit. Studies showed that women who consumed one or two drinks a day upped their risk for breast cancer by 10 percent, while those who consumed three or more drinks a day raised their risk by as much as 30 percent.

Wine takes the prize as one of the lowest-calorie alcoholic beverages per serving. For a 5-ounce serving, red wine rings in at approximately 105 calories. White wine contains about 100. Three ounces of dessert wine, on the other hand, racks up 141 calories — so continue to mind your after-dinner drink count.

If you're really watching your waistline, consider cutting calories with a wine spritzer. "If you mix wine with sparkling water, which has zero calories, in a way you're getting more bang for your buck," says Young. Twice the drink for the same number of calories? Sign us up!

So, Glass Half Empty or Half Full?

The bottom line: When it comes to drinking for your health, moderation is key. The USDA defines moderation as up to one drink a day for women. In the case of wine, that means 5 ounces.

NEXT: Learn abut the secret health benefits of chocolate!