The Health Benefits of Alcohol

Red wine has long been touted as the drink du jour of health-conscious imbibers, but cocktail and beer lovers take note: It turns out that all alcohol has its upsides.
By Jocelyn Voo 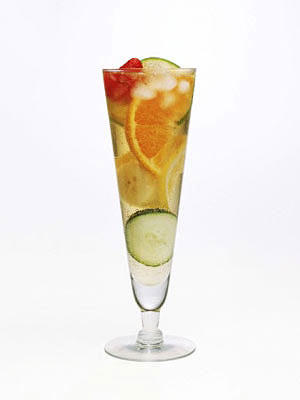 Drinking moderate amounts of any kind of alcohol — be it beer, wine, or hard liquor — will raise your good HDL cholesterol levels, says Lisa Young, adjunct professor of nutrition at New York University and author of The Portion Teller Plan. "That's a really big benefit to the people who do have cholesterol problems because it is hard to elevate your good cholesterol," she says.

The downside? Drinking all types of alcohol will also increase your risk for certain cancers, such as breast and liver cancer. In fact, a September study showed that women who averaged one to two drinks per day raised their risk for breast cancer by 10 percent, and those who drank three drinks a night raised their risk by as much as 30 percent. Risk for other illnesses, such as heart disease, cirrhosis of the liver, heart muscle damage, and stroke are also correlated with excessive alcohol consumption.

If a woman is pregnant, drinking can also lead to miscarriage or fetal alcohol syndrome in an unborn child, which can impair growth and nervous system development.

According to the USDA, a 1.5-ounce shot of 80 proof distilled spirits (gin, rum, vodka, whiskey) contains approximately 96 calories. Calorie counts for mixed drinks vary wildly, clocking in at anywhere from 280 calories for a gin and tonic to over 800 calories for some frozen, creamy drinks. Opt for cocktails made with calorie-free mixers, such as Diet Coke and soda water, which are easier on the waistline.

The Better Side of Beer

If you thought beer was just for baseball games and frat parties, think again!

According to a letter in medical journal The Lancet, beer consumption may actually protect against heart disease. Beer contains vitamin B6, which prevents the buildup of homocysteine, a chemical linked with heart disease

Moreover, studies have shown that one serving of beer provides roughly the same amount of heart-healthy antioxidant protection as red wine, and that consuming moderate amounts of beer lowers one's chances of coronary heart disease by 30-40 percent, compared to those who don't kick back with the occasional brew.

Light beer tallies about 108 calories for 12 ounces, while regular beer rings in about 144 calories. If you're a beer-drinker who's watching her weight, opt for light beer. "Light beer will cut the calories, so if you're going to do something lighter, look for light as opposed to low-carb," advises Young. "The low-carb beer will give you the same calories as the regular."

Your Overall Intake: What You Need to Know

Though there is no universally accepted standard drink definition, in the U.S., one drink is usually considered to be 12 ounces of beer, 5 ounces of wine, or 1 1/2 ounces of hard alcohol.

If you choose to drink, moderation is key. "The benefits that you get come from moderate amounts, which are one to two drinks a day," says Young. "You can't save up and binge drink on the weekends. You're going to either use it or lose it."

Moreover, alcohol does have addictive properties, so if your family history has been prone to such problems, it's probably best to abstain from it entirely.

NEXT: Learn about the secret health benefits of wine