The Dangers of Vitamins, Supplements, and Minerals -- and the Truth About Their Regulation | Fitness Magazine
Skip to main content

The Truth About Nutrition Supplements

Who's making sure that the nutrition supplements, vitamins, and minerals you're taking are safe and effective? Actually, nobody. Here's the 411 on the pills you're swallowing. 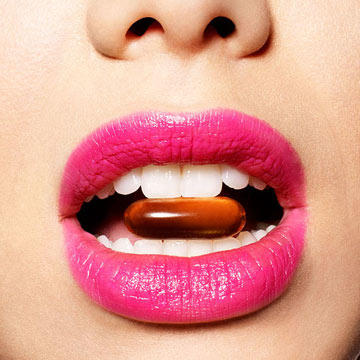 What's Really in Your Multivitamin?

You value your health, so you take your vitamins and supplements, right? Well then, this just may make you sick: In one recent test, nearly 30 percent of multivitamins on the market had contamination problems or ingredient shortfalls. When you swallowed the pills, you swallowed whatever story the pill makers put on the label. And that could be almost anything.

Seven in 10 Americans are now gobbling down billions of vitamins and supplements on the promise that they will improve health, performance, longevity, skin, outlook, sex, hair, something, everything. According to a 2002 Harris Poll, more than half of us believe that a government agency like the Food and Drug Administration is keeping a watchful eye on the $20 billion supplement industry.

It's not. The federal regulators who would normally be all over poor-quality supplements had their hands tied by a piece of legislation signed into law by President Clinton in 1994 called the Dietary Supplement Health and Education Act (DSHEA). The bill was intended to make dietary supplements — including vitamins, minerals, and herbs — more widely available by classifying them not as drugs, like aspirin or ibuprofen, but as foods. In practice, that means supplements not only don't have to do what they promise (such as protect against disease) but don't even have to be safe.

The results have been predictable: In 2004 alone, more than 24,000 "toxic exposures" to supplements were reported, while other research showed that some supplements contain potentially dangerous contaminants such as lead, mercury, pesticides, mold, and bacteria.

No wonder some consumer advocates say that this regulatory loophole has helped create a marketplace that fails to protect consumers from contaminated, adulterated and, in some cases, deadly supplements. "People just assume that because vitamins, minerals, and herbs are naturally occurring, they're also safe, but that's not always the case," says Bill Gurley, PhD, a professor of pharmaceutical sciences at the University of Arkansas for Medical Sciences.

Concerns about quality and safety have swirled around dietary supplements ever since the 1700s, when the first snake-oil salesmen peddled elixirs with outrageous, unsupported claims; they're one reason the FDA was created, back in the 1930s.

But from the beginning, the rules for supplements have been far less stringent than those for conventional drugs. Unlike pharmaceutical companies, dietary-supplement manufacturers don't need FDA approval to sell their products, and they certainly don't need to conduct expensive clinical trials. Worse, makers aren't even required by the government to report any "adverse events" — FDA-speak for unwelcome side effects such as blotchy skin, heart palpitations, and organ damage.

As a result, the FDA is unable to compile convincing evidence against a bad product in order to ban it. Even when anecdotal evidence does pile up, such information is sometimes too weak to effect a change, explains Marvin Lipman, MD, chief medical advisor for Consumers Union, publisher of Consumer Reports. "You need clinical data to prove that ingredient X caused side effect Y. But because supplements are poorly studied at best, that's tough."

How Safe Is Kava?

Here's an example: Kava, an herb found in the South Pacific, whose root has sedative properties. "After it became popular for stress reduction, some manufacturers started including stems and other parts of the plant in their formulas, presumably to save money," explains Gurley. Unfortunately, these parts contain a toxic compound that can cause liver damage. The FDA issued a safety warning in 2002 but didn't remove kava from the market or restrict its sale. Why? Because there's no proof that anyone in the U.S. has died from liver damage directly caused by kava stems.

Even if deaths do occur, the FDA may still find itself impotent in a courtroom. Take ephedra, an amphetamine-like stimulant, which was linked to as many as 155 deaths and more than 16,000 adverse events before the FDA got it banned in 2004. Often packed into weight-loss and energy-boosting products, ephedra can raise heart rate and blood pressure and trigger seizures, heart attacks, and strokes. Yet last year, a federal judge in Utah ruled that despite the seeming mountain of anti-ephedra evidence, the FDA hadn't proved that the herb was dangerous in small quantities. (The ban is now in bureaucratic limbo as the FDA figures out its next move.)

Although headlines often focus on concerns about herbal supplements, everyday vitamins and minerals aren't problem-free. "The most common issue is that a product won't contain or deliver all the ingredients it promises," says Tod Cooperman, MD, president of ConsumerLab.com, an independent supplement-testing service. And what's missing may cause harm: At least one vitamin B complex tested by Consumer Lab.com provided less than the RDA for folic acid — a deficiency of which can cause birth defects such as spina bifida.

The Trouble with More Regulation

The American Medical Association says that megadose vitamins and herbal supplements should be regulated like drugs — with mandatory premarket testing and FDA approval for safety and effectiveness before being sold. That may sound like good advice from doctors. But some consumer advocates say that many Americans don't want their access to vitamins, minerals, and other complementary health treatments restricted — and perhaps for good reason.

For one thing, FDA-regulated pharmaceuticals aren't exactly risk-free either. In fact, with medications causing hundreds of thousands of adverse events every year, many people see supplements as the safer option. "It's important to remember that products like ephedra are the exception," says Judy Blatman, spokesperson for the Council for Responsible Nutrition, a supplement-industry trade group. "About 150 million Americans are using supplements that are basically safe." Price hikes also cause concern: If supplements had to undergo extensive clinical testing, manufacturers would charge more to recoup their research investment. "Most manufacturers would simply be forced to call it quits," says Dr. Cooperman.

Moreover, not every single product out there is a lousy one. There are many good, reliable supplements on the market that have been produced by reputable manufacturers.

A more reasonable solution may be to tinker with current laws to give the FDA more bite when it comes to taking products off the market. Two bills now in Congress could provide additional fixes. The first would require manufacturers to forward all serious safety reports to the Secretary of Health and Human Services (HHS) so that unsafe products could be ferreted out more quickly. The other would require the FDA to budget more money to regulate supplements.

By law, supplements can't promise to treat a specific disease, but you'd never guess that from reading some labels. Most claim to "help," "promote," "regulate" or "improve" just about any normal body function. Before you believe what you read, look for the FDA-mandated disclaimer (usually printed inside a small rectangular box) that reads: "This statement has not been evaluated by the Food and Drug Administration. This product is not intended to diagnose, cure, or prevent any disease." Other vague-to-the-point-of-meaningless words include "natural" (even dangerous contaminants like lead are "natural"), "standardized" (by what authority?), and "verified" (by whom?).

4 Ways to Protect Yourself

Until adjustments like these are put into place, it's buyer beware. But there are steps you can take to prevent your own private supplement scare.

Be independent. If you or a member of your family takes a lot of supplements, Gurley recommends subscribing to an independent testing service, such as the Natural Medicines Comprehensive Database ($92 a year, naturaldatabase.com) or ConsumerLab.com ($27 per year or $44 for two years), to keep tabs on your preferred brands. Quackwatch.org also regularly surveys the supplement industry.

Seek out well-tested products. If you're not interested in joining a subscription service, look for supplements that carry the seal of the United States Pharmacopeia (USP), a nonprofit public-health organization that charges manufacturers a fee to conduct independent product testing. The USP seal doesn't indicate that a particular ingredient is safe or effective, but it does ensure that the product you're buying contains what the label says it does, that it's free of contaminants, that it will be properly absorbed into your body, and that it was made using safe manufacturing processes.

Beware of complicated ingredient lists. "The more complex a product is, the more likely it is to have problems," says Dr. Cooperman. And be wary of products that tout a "proprietary formula" or a "uniquely formulated blend." "Those are wiggle words for putting all kinds of things in there without having to explain what they are or why they're there," he says.

Get educated. The Center for Food Safety and Applied Nutrition (cfsan.fda.gov/list.html) is ground zero for information on the products of most concern. Click on the "Dietary Supplements" tab to see recent announcements and warnings, or subscribe to the Dietary Supplements/Food Labeling Electronic Newsletter to have them e-mailed to you. If you do experience side effects that you believe may have been caused by a supplement, file an adverse event report with the FDA via the provided link. One person's so-so side effect might be another's really bad one.

Consumers Union, a consumer advocacy group, warns that the most dangerous supplements on the market can cause serious problems. Steer clear of:

How Does Your Brand Rate?

ConsumerLab.com is an independent testing service that regularly screens supplements for contaminants. It also tests the accuracy of product labels. Here's a sampling of recent picks and pans in seven popular supplement categories.

None of the 29 vitamin C products tested by ConsumerLab failed the review. A test in 2003 also came up clean.