Get a Grip: How to Beat Stress and Take Control of Your Life | Fitness Magazine
Skip to main content

Get a Grip: How to Beat Stress and Take Control of Your Life

Don't let daily stresses pull you off course. With the right attitude, you can take control of your finances, your fitness routine, and your love life -- take charge!
By Maura Kelly 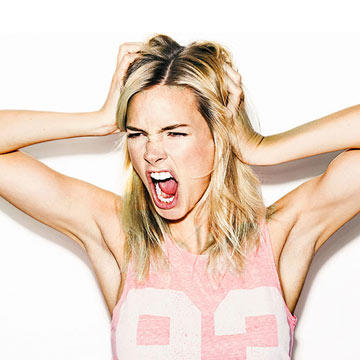 Stand Up and Take Charge

My life list is short and simple: I'd like to buy an apartment, finish the novel I've been writing, lose a few pounds, and be in a healthy relationship. Not too much to ask, right? And yet a couple of months ago, with the economy tanking, no boyfriend in sight, and a novel that's half-finished, I was feeling frantic, wondering if I could ever turn things around.

"If our lives seem out of control, the world becomes frightening," says Nancy Molitor, PhD, an assistant professor of clinical psychiatry and behavioral sciences at the Feinberg School of Medicine at Northwestern University in Chicago. That can create a scenario in which all you want to do is curl up in your jammies. But instead of pulling the covers over your head, you need to stand up and take charge. "When you feel equipped to face whatever life throws your way, you feel happier, healthier, stronger," Molitor says.

Start by identifying things that you can change, she advises. Most of us feel beaten down because we obsess over problems we can't do anything about, such as rising prices. But if you focus on what's in your power, like how often you work out or the amount of money you save, you'll be amazed by what you can accomplish. Here's how I took over the reins -- and you can too.

Ever since I developed tendinitis in my left knee a year ago, I haven't been able to take three or four long jogs every week, like I used to. As a result, I gained weight -- despite the fact that I was Spinning and strength-training every day.

"Is there a way to work out smarter?" I asked FITNESS advisory board member Joe Dowdell, a physical trainer and the owner of Peak Performance Gym in New York City.

"Your body needs rest in order to be able to repair itself," he told me. "Training every day can lead to overuse injuries and burnout." My habit of doing 40 minutes of cardio before hitting the weight machines wasn't so smart after all. Dowdell's fix: Full-body workouts with weights on three alternating days. "Go back and forth between lower- and upper-body exercises," he advised.

"That way, one group of muscles will be recovering as you're working the other half, which means you'll do more work in a shorter period of time." Dowdell also suggested I try some high-intensity interval training on a Spinning bike, a rowing machine, or a stairclimber at the end of my weight-training routine to boost my metabolism and torch even more fat. "Warm up for three minutes at low to moderate intensity, then crank up the resistance," he said. "Go really hard for 30 seconds, then lower the resistance and work out moderately for 60 seconds. Repeat the cycle six to eight times."

I tried his plan, and I've cut my gym time by about five hours a week -- plus I've dropped five pounds so far! My body feels a lot stronger, especially my knees. I'm seriously thrilled.

As someone who's self-employed, I never know how much money I'll make in any given month. Factor in that (1) I have to pay for my own health insurance, (2) I'm not contributing to a retirement fund, (3) I spend big bucks on rent every month, and (4) the nation's financial system is a mess right now, and it's no wonder I'm nervous.

Figuring out how much it would take to buy an apartment seemed smart, especially because there were deals to be had, so I called my bank. When I mentioned my annual income, however, the financial advisor literally laughed at me. "You'll never get a mortgage," he said.

Determined to prove him wrong, I spoke to Chellie Campbell, a Los Angeles financial coach and the author of Zero to Zillionaire: 8 Foolproof Steps to Financial Peace of Mind, who immediately made me feel better. "Buying is not always smarter," she said. "Look at how many people are losing their homes right now. They've trashed their credit ratings, on top of it. And since your income is unpredictable, locking yourself into a huge monthly mortgage just isn't a good idea."

Campbell congratulated me on being able to save anything, especially when so many other people can't. (The consumer debt in the U.S. is currently more than $2 trillion.) "Having dollars in the bank makes you more confident in general," she said.

The one thing I should do pronto, Campbell added, was contribute at least $50 a month to the IRA I have from my old job. I've started socking the money away, and I feel richer already.

It was time to face the Big Question: Why can't I find a decent guy? "When love doesn't work out, women always assume it's because of some kind of personal flaw," said Sherry Argov, a relationship expert in Los Angeles. "In reality, it's not about you. If you went shoe shopping and you couldn't find something that fit, you'd never say, 'My feet must be deformed.' Why apply that kind of logic here?"

The key is to be focused. "As soon as you realize a guy is not serious about the future, move on immediately, no matter how great he seems," Argov said. "You're better off putting time into your career instead of chasing a dead-end relationship. Nothing else will make you feel more out of control."

Wise advice, but how was I supposed to put it into action when I wasn't meeting any men to test it on? "Do an activity you enjoy," said Karen Salmansohn, another life coach and the author of How to Be Happy, Dammit. "Bonding is easier through shared experiences." Thanks to her prompting, I've started taking a coed group exercise class. While there's no one in it whom I feel goose-bumpy about, doing relay races and tug-of-war has been such a fun, easy way to connect with strangers, I'm thinking of joining a soccer team.

I also enrolled in a new gym, and I've had a few interactions with a hottie who likes the rowing machine. The other day he was wearing a shirt that said ESSE QUAM VIDERI on it. "It's Latin for 'to be rather than to seem,'" he explained when I asked. Then he laughed. "Or, basically, it's a really pretentious way of saying, 'Don't be pretentious.'"

A brainy boy who's brawny -- I have a huge crush. Tomorrow I'm going to ask him out. Now that's what I call taking control!

7 Ways You Can Take Control

Show life who's boss with these easy strategies.

Focus on your attributes.

"If you think you're unworthy, other people will think so too," says New York City life coach Michael Melcher. He suggests making a list of 25 things you like about yourself. Include talents such as your ability to run six miles three times a week. Tape it inside your daily planner, on your bathroom mirror, or to the fridge.

Steer clear of people who drag you down.

That means cutting ties with "friends" who constantly tell you what you're doing wrong or who chronically mope and complain. "Their unhappiness is contagious," relationship expert Sherry Argov says. "Positive people build you up and give you the energy to keep going, even through hard times."

Save at least 10 percent of your income.

That's what anyone who's serious about gaining control of her money should aim for, says financial coach Chellie Campbell. To put cash away: Eat out less and cook at home more, shop at warehouse stores, and buy new clothing only when you really need it.

Don't take everything so personally.

Blaming yourself for things that aren't your fault is a major cause of low self-esteem, says psychologist June Brown, PhD, of the Institute of Psychiatry in London. So the next time the person you're chatting with at a party excuses himself, don't assume you bored him silly. Instead, tell yourself he wanted to circulate, and move on.

"Every time a self-critical thought pops into your head, toss it right back out by telling yourself something encouraging," Argov advises. "For example, if you start thinking, 'I'm a failure because I haven't yet run a marathon,' change that to 'I have the discipline to keep training.'"

Go from dating to doing.

Can't face the prospect of summarizing your life story one more time? Take a break and spend more time participating in activities you enjoy. "It's easier to meet someone and develop a relationship through shared interests," Melcher says.

Stop worrying about what other people think.

If you live according to your own values, you'll feel more confident and satisfied.