Plus, the symptoms to look out for and the solutions to help you cope 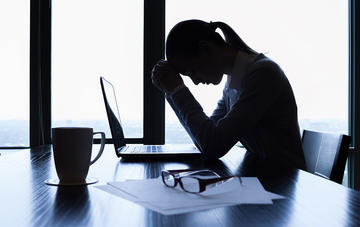 Depression is a serious mental health issue, affecting more than 23 million people in the United States. Most who suffer from depression are able to experience improvement in their symptomology with proper treatment. However, some are still reluctant to seek treatment. Stereotypes about mental health issues, inaccurate assumptions about who is vulnerable to depression and a lack of understand of the symptoms of depression all play a role.

Historically, the media has been accused of not only inaccurately depicting symptoms of depression, but also of creating stereotypes and stigmas around depression, making individuals reluctant to seek treatment. One common myth, for example, is that depression is predominantly a 'female issue' with the primary symptom of sadness. However, with celebrities like Brooke Shields, Ruby Rose, Jim Carrey, Miley Cyrus, and Mike Wallace talking opening about their battles with depression, media opinion and portrayals are beginning to shift.

This begs the question: what should we know about depression and how do we treat it?

The diagnosis of depression is more than just sadness or having a depressed mood. To receive a diagnosis, an individual must experience at least 5 of 9 symptoms of depression nearly every day for more than two weeks.

In addition to exhibiting at least 5 of these 9 symptoms for a two-week period, these symptoms must also cause significant distress or impairment in social, occupational, or other important areas of functioning.

Why does it seem like more women are depressed?

The fact is, there is no 'profile.' The average age of onset of depression is around 40-years-old, but cases of depression have been reported from children to the elderly. While it is more commonly reported in women than in men, researchers are unclear if this is because it is more commonly experienced in women than in men, or if women are more likely to seek treatment and thus, receive a diagnosis. One interesting finding that may help explain this gender difference has to do with reported symptomology. While women are more likely to fit the "stereotypical" symptom pattern of increased sadness, men are more likely to be angry and irritable – symptoms often are not associated with media portrayals of depression.

What should you do about it?

If you are suffering from symptoms of depression, know that you are not alone, and with proper treatment, will likely be able to fully recover. If you think you know someone you think is suffering, urge them to seek help. It is rare for someone dealing with depression to come out of it on his or her own. Most treatment protocols include both prescription medications to help return brain chemistry back to 'normal,' as well as therapy. (Exercise can help too!) The more we know, the more we can educate the public about depression and improve our efforts as a society to both prevent and treat the issue.