What to say — and when to shut up — to instantly simplify your life and beat anxiety.
By Kristyn Kusek 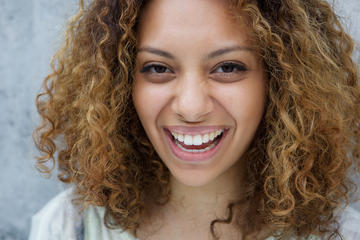 Imagine that you're stuck in a traffic tie-up so massive it will be a miracle if you make it to work by lunch — let alone in time for that must-attend monthly staff meeting. Sweat running down your forehead, you clench the steering wheel until your fingers turn numb and wail, "I'm going to be laaaate! (Insert expletive.) My boss is gonna fire me!"

Not a pretty picture, huh? Now, using the same visual, substitute this audio: "There's nothing I can do about the traffic. In the grand scheme of things, this is not that big a deal." Soon, your breathing becomes normal, and the feeling returns to your hands. What you've witnessed is the power of words — and how using the right ones can help deflect a full-blown stress attack.

Life doesn't always go as planned — a flight is canceled due to weather, your knee starts to throb at mile 16 of a marathon. But it's how you respond to these situations that can make all the difference. "The majority of the stress we experience occurs because of the way we talk to ourselves and others about normal life events," explains Frederic Luskin, PhD, a psychology researcher at Stanford University and author of Stress Free for Good (HarperSanFrancisco, 2005). When we rewrite this dialogue, our emotional reaction will change too, he explains. Fortunately, by adding the following words and phrases to your repertoire — some that you say to yourself, some that you say to others — you can maneuver gracefully through awkward situations and everyday anxiety traps.

The topic at your friend's cocktail party is a best-selling novel (which you haven't read) or the latest political upheaval in the Middle East (which you skimmed over in the paper). You don't want to seem stupid or uninformed, so when another party-goer asks for your opinion, you scramble for an answer.

The stress you experience in these situations arises from an in-the-moment misperception that you need to have a "perfect" response, explains Patricia Farrell, PhD, a psychologist in Englewood Cliffs, New Jersey, and author of How to Be Your Own Therapist: A Step-by-Step Guide to Building a Competent, Confident Life (McGraw-Hill, 2004). When you don't, your blood-pressure level can rise.

Next time you're put on the spot, be honest and say, "I don't know." "By admitting your ignorance, you relieve the pressure immediately," says Farrell. "The reality is that the world won't collapse if you don't always have an answer. And unless you usually keep company with 13-year-old boys, nobody's going to snicker at you for not knowing something."

Finally, the beauty of saying "I don't know" is that instead of standing silently (and worrying that you'll be found out), you can slide your way into a conversation by asking others to fill you in on the topic ("I'm not familiar with that book. Can you tell me about it?"). Most people will be happy to oblige and may even feel flattered that you asked them to share their knowledge.

Your boss asks a question about a client, and your mind goes blank. Or a needy neighbor asks you to join her cooking club — sounds fun, but committing to spending more time with her might not be the best idea. When you're floundering for the right words, the best thing to say is, "Let me get back to you."

It's easy to get flustered when you're caught off-guard, and a rash response or snap judgment can come back to hurt you later, says Farrell. So even if you're talking to someone you want to impress (like your boss), this phrase makes you sound more in control and buys you time to formulate the appropriate response — or at least one that's in your own best interest.

Whether you're arguing with your husband over a new paint color for the kitchen or debating whether Hillary should run for president, disagreements can be a huge source of ongoing tension (especially if you're both stubborn or there's no one right answer).

Instead of thinking, "I'm right and you're wrong," acknowledge the other person's point of view, suggests Farrell. This doesn't mean you have to agree. Rather, it reminds you to slow down and take time to listen, which reduces the need to barrel down your opposition in order to make your point. "Your interaction naturally becomes more agreeable, so the conversation is more pleasant overall," she says.

Unexpressed emotions are such a major source of tension that they can eventually have physical consequences. "Psychologists call the phenomenon alexithymia, which means that when you can't speak for yourself, your body speaks for you," explains Farrell. For example, one study of 12,986 people at the University of North Carolina at Chapel Hill found that those who routinely suppressed their anger put so much stress on their bodies that they nearly tripled their heart-attack risk. This can also manifest in less serious — but still troublesome — ways, such as headaches, insomnia, forgetfulness, gastrointestinal distress, and fatigue.

To minimize the health risks, fess up to your feelings immediately. Tell the other person that you're angry, sad or hurt, starting the statement with "I feel." This helps you avoid inflammatory, accusatory language (e.g., "You hurt me...!"), explains Pamela Peeke, MD, author of Body for Life for Women: A Woman's Plan for Physical and Mental Transformation (Rodale, 2005), and enables you to have a calmer, more cooperative conversation.

When you have a packed calendar, taking on even the smallest activity can send your stress reflexes soaring. Knowing how to say no tactfully and firmly is key to deflecting this type of stress, says Dr. Peeke, but it can be hard to do. An outright "no, thanks" may cause you to worry about upsetting the other person, while gentler phrasing ("I'm not sure this is the right time" or "I wish I could") sounds wishy-washy and implies that you might be available under different conditions.

Prefacing your refusal with a sincere "I'm sorry" softens your response without providing an opener for other qualifiers (as would "I'm not sure"). "People will be less likely to press you further since they'll feel you're being genuine," says Luskin. And you'll feel better knowing that you asserted yourself without hurting anyone's feelings.

If you've ever done something out of your comfort zone — gone on a blind date, given a speech or trained for a marathon — you're familiar with the price of self-defeating talk. Thinking "What if it goes horribly, horribly wrong?!" often makes it do just that. Affirming statements, on the other hand, soothe your nerves by reinforcing the idea that you're in control of the situation, not victim to it.

When you're feeling overwhelmed by a difficult experience, repeat "I can do this" to yourself. Even if it seems silly or disingenuous, it will eventually divert your attention, and you'll start to believe the statement.

Your new officemate is a nightmare: When she's not whining about her workload, she's bad-mouthing others in the office. You know that the next eight hours are going to be stomach-churning, and there's little you can do about it.

According to Dr. Peeke, we tend to instigate stress by ruminating over problems we're powerless to change. In other words, instead of shrugging your shoulders, you waste time, attention, and stress being frustrated by her poor disposition. The bottom line: Whether it's a traffic jam or a coworker who zaps your Zen, actively distancing yourself from an uncontrollable situation will make it easier to go with the flow.

Thinking about pleasurable activities as though they're chores ("I have to get my nails done" or "I have to meet Jen for dinner") can leave you feeling pressured and full of dread. Switch one word — have to choose — and you're no longer lumping the good stuff in your life into the category of "crappy stuff I must endure."

"It's a minor shift in vocabulary, but an important one, because it validates the fact that you can decide whether or not to do something in your life," says Farrell. Think about changing your phrasing when you describe some of your obligations, too. "Many of the annoying tasks we must accomplish actually help us reach our goals," says Farrell.

When faced with a high-stakes situation — say, an interview for your dream job, a date with a great-on-paper guy — it's common to put undue pressure on yourself. You may feel that you either must have a blue-ribbon, no-mistakes moment or you're screwed.

Tell yourself, "I'll do my best." Like "I can do this," this phrase helps you feel hopeful, says Luskin. But it also reminds you that perfection isn't the goal. When researchers at Penn State studied gymnasts who were trying out for the U.S. Olympic Team, they found that athletes who spoke to themselves with encouragement during the trials were more likely to succeed and make the cut, despite experiencing the same anxiety.

Ask yourself what's causing the most stress in your life right now. Is it your puppy's refusal to become housebroken? A rough patch in your marriage? That woman who just won't get off the treadmill at the gym? Now apply the "six-month rule": Will you still be fretting over this "crisis" a half a year from now? Simply remind yourself that the mountain you're churning over right now is nothing more than a temporary molehill, and you'll feel instantly much less worried and distraught.

If you're besieged by a complainer or catty Cathy, it's often best not to chime in. The tense, negative energy wastes time and causes more stress. Smile and don't say a word.