These Olympians Swear Sensory Deprivation Helps Them Achieve Their Goals

Here's why—and how everyday athletes can make it work for them, too. 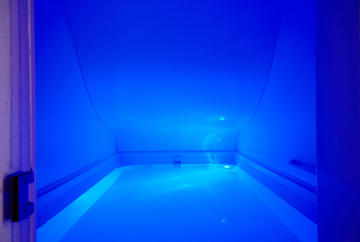 Sensory deprivation. Flotation therapy. Whatever you want to call it, it's in—and not just among New Age healers and hip celebrities. Olympians are increasingly getting their float on in preparation for the Rio Games.

Flotation therapy, in a nutshell, is a treatment that strips away your brain's sensory input—from light, sound, even touch—for a full hour at a time (sometimes more), in order to increase relaxation, improve muscle recovery, ease aches and pains, and help athletes of any level get their heads in the game.

While flotation therapy enjoyed a hot moment of on-the-fringes popularity in the U.S. during the '50s and '60s, it has traditionally been much more mainstream abroad—among both everyday and elite athletes. During the last decade, though, it has definitely grown in popularity. And this last year, it completely blew up in the States.

For instance, while Team USA fencer and complete badass Miles Chamley-Watson recently went to Floating Lotus in New York City in preparation for Rio, the Australian Olympic team is said to have used it while prepping for the London Olympics. Then, Golden State Warrior and Team USA basketball player Harrison Barnes recently floated on video for ESPN, while British track-and-field star Tasha Danvers (who won bronze in Beijing), used flotation therapy during her training—as did her teammate Jade Johnson.

"When I first got into flotation therapy, I tried it three times in a week, and it was so beneficial that I had another two sessions leading into the 2008 European Cup at Annecy, France. It was there I jumped a personal best of 6.81m and qualified for the Beijing Olympics," Johnson previously told Just Float. "I have always used physiotherapy and massage to help injury recovery, but flotation is different. When I float, I can really feel a lot of pressure being taken off my back, and when I compete, I feel calm and my mind and body feel in balance. I think everyone should at least have one float in their lives."

So How Does Flotation Therapy Work?

It's hard to imagine the whole "sensory deprivation" thing. After all, most of us have never not experienced light, sound, or touch.

To achieve flotation therapy's supernatural state, which some actually liken to an acid trip, flotation companies fill their tanks with a combination of water and Epsom salt. So much Epsom salt, in fact, that your body is incredibly buoyant and balances on top of the water with zero effort. Really—if you try to push, say, your arm down into the water, it takes real effort. That way "you're basically in zero gravity for an hour or more, and as all of your muscles relax—some people even feel their backs and joints pop," says Joel Granik, a licensed acupuncturist, Eastern medicine practitioner, and owner of Floating Lotus in NYC.

The water is also at a constant temperature set around 93 to 94 degrees, matching the temperature of your skin's surface. That way you really don't feel the water, says Granik. Things get even trippier when the lights go out (although you can leave on a dim light—or even use one that changes colors—if the idea of being in complete darkness is too unnerving) in order to send you into a meditative state.

"With sensory deprivation, your brain goes into a totally different [place]. Brain waves are similar to what experienced meditators experience," Granik says.

While some people just choose to mentally peace out during the sessions, others, especially athletes, use the time to perform visualization exercises. They might see themselves crossing the finish line, hear cheers from the stands, or feel themselves lifting a heavier weight than ever before, explains Barbara Walker, Ph.D., a sports psychologist with the Center for Human Performance in Cincinnati. Experiencing these game-day situations through visualization techniques, or mental imagery, allows people to enter a competition feeling, in some sense, like they've already been there and done that. It increases confidence and performance.

"When you're in a relaxed state, without the constant sensory input we encounter in our daily lives, that's the perfect time to use visualization," she says.

Then there are the physical benefits to consider. Research from the University of Toledo that goes back to the '80s and '90s also suggests that flotation therapy improves blood pressure and mood while also easing muscle pain and tension. Another study in Biofeedback and Self-Regulation found that float sessions significantly lower the body's levels of the stress hormone cortisol, and experts believe that a drop in stress hormones is critical to both mental and physical performance. For instance, a 2006 International Journal of Stress Management study found that flotation therapy can greatly reduce stress and anxiety, with effects lasting up to four months after treatment. Managing stress hormone levels, particularly after exercise, can aid in post-workout recovery, says Walker. And any reductions in muscle tension may also enhance blood flow to muscles to boost exercise recovery even further.

Get Started With Sensory Deprivation

Sessions generally range from $50 to $100, last between an hour and 90 minutes, and are becoming increasingly prevalent in major cities. While many people notice benefits even after the first session, Granik recommends trying it at least three to four times to get the full effect.

"If you've never floated before, your brain goes all over the place during the first few minutes. Then it starts slowing down. Then it's over. You know you weren't sleeping, but then all of a sudden time is up," he says. "The more you do it, though, the shorter this adjustment period is and the better you get at it."

Over time, Granik says people can even learn to get back into their relaxed flotation state whenever, wherever. To get there, he typically recommends that clients, especially fitness-minded ones, float once per week or every other week. "But if you can only do once a month, it still works great as a sort of 'reset,' he says. "It'll still help you get your mind right and help you reach your fitness goals."