Meet LeAnn Hewitt, who's not only a powerlifter, but also a kind, academically gifted and family-oriented teen—who's redefining #goals while she battles diabetes. 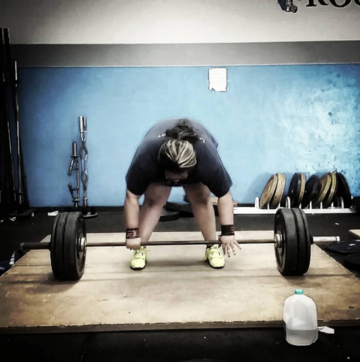 LeAnn Hewitt is the definition of inspiration: The 17-year-old teen, who came from Jamaica at just age four, is graduating at the top of her high school class, happens to also be a competitive powerlifter too. As BuzzFeed reported, Hewitt says that she "was recruited to join the girls weightlifting team by my current coach and former leadership teacher. After I competed in my second state championship, I decided to pursue lifting outside of school. That's when I discovered powerlifting."

Not only did Hewitt discover it, but she's regularly breaking records, taking names and winning championships. Case in point: At the Arnold Sports Festival, Hewitt broke six world records, becoming the strongest woman in squat, bench, deadlift, and total—an impressive 1,268 pounds—within her division.

The real kicker, though, is that Hewitt manages to kick all this ass while also dealing with diabetes."I have to check between lifts and during competition to make sure I'm lifting at safe blood sugar levels," Hewitt told BuzzFeed as a part of their Body Positivity Week. "I also have to monitor my diet to maintain proper sugar levels in order to lift."

With the support of her close-knit family and friends, though, it seems there's no stopping Hewitt. Her sights are set on the Olympics, even if powerlifting is not currently an Olympic sport. "Remain strong. Dream big, rise above adversity, and believe in yourself even when your goal seems unattainable," she told BuzzFeed.